I don’t know about you, but I like my Sundays slow and quiet. The bustle of another busy week leaves me in need of replenishment, and lazy Sundays are just the ticket for recharging before tackling another seven days of business challenges. A day on the sofa with our dogs suits me just fine, and winter weekends in Vermont are all about the art of hibernation. We do it well. 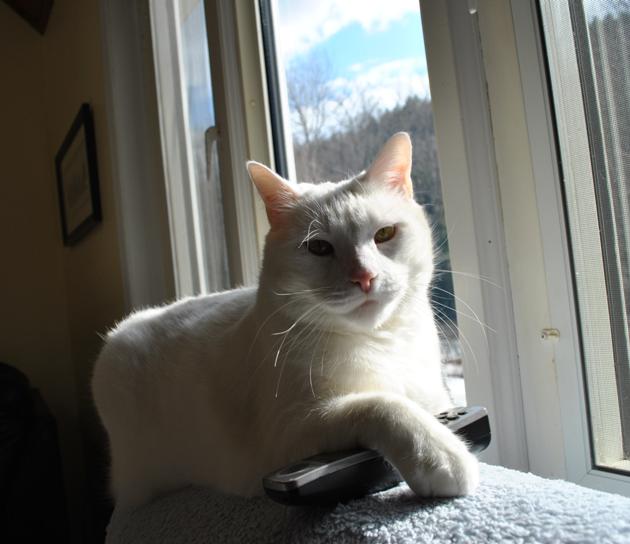 Much to my dismay, on this Sunday, a large, annoying feline had different plans for me. I knew the day was destined for mediocrity when I was jarred from a restful slumber by my wife’s screams. “NEIL, WAKE UP NOW – THE POLICE ARE HERE AND THEY WANT TO SPEAK WITH YOU!!”

Well good morning and WTF, thank you very much. This law abiding citizen does nothing to draw the attention of the authorities, so on balance, I was convinced that I was dreaming. I threw a pillow over my head in protest. Then it clicked. I sprang from bed, dressed as quickly as possible and careened down our stairway, skidding to stop at the feet of the town police officer standing in my sunroom.

His notepad was drawn in anticipation of whatever half-asleep drivel I might have to offer. I cracked a smile, figuring a lighthearted approach to the situation was best, given the circumstances. I was wrong. The officer demanded to see my ID, and gave it a very thorough inspection after I produced it. He looked at me with obvious disdain as he handed it back. He was not impressed to be here, and did nothing to disguise his distaste at the inconvenience. This particular policeman had already decided that I was completely crazy, and that my wife was a close second. I don’t blame him. I blame my cat.

For some reason, the cat we saved, the unwanted kitty dumped at a local shelter, the feline that essentially runs our household…well, he just lives to torture me. Laugh all you want, I have seen enough to know that he’s enjoying it.

On any given Sunday, Boo will do his best to wake us early. As a matter of fact, most mornings are marked by the sounds of his exploits as he does his level best to clear every item from every surface in our bedroom. Jewelry, lamps, books, alarm clocks, and assorted items crash to the floor in a ruckus as he makes it known to us that breakfast is expected. Even the dogs look at him sideways when he wakes them with his noisy morning ritual.

Of course, over time one becomes desensitized, and I have slowly trained my brain to disregard his antics for the sake of sleep. I nearly slept through his tantrum on this Sunday morning, and would have had he not dialed 911.

Yes, that’s correct. Kitty called in an emergency. Shortly after sweeping the phone off the nightstand, Boo said a quick hello to a 911 operator before slinking off to devise whatever unpleasantries he has in store for me next. We know this to be true because after collecting and repositioning all items and electronics we were able to fall asleep for a minute or two before the phone rang. It was the 911 operator checking to see if we were ok.

My wife laughed it off. She explained to the operator that we were the owners of an unusually naughty cat, thanked her for calling, and let me go back to sleep while she went downstairs to make breakfast for the furry little troublemaker responsible for this unfortunate misunderstanding. While she was making said breakfast, the police arrived. The operator thought our kitty calls for help story was a crock, and the police had been asked to verify that all residents of the property were safe…and not entirely loony.

After checking my ID and asking a few questions, the officer gave my wife and I a final once-over, as if he didn’t believe where he was, or the reason for his visit. Just before stepping out on our back porch he turned and said, “I did see a cat in your window when I pulled in.” It sounded like a half-question-half statement, uttered aloud only for the sake of verifying his own sanity. He drove off slowly, staring back at our home as if it were a mirage.

For now, life is back to normal. Another crazy Monday threatens to consume me while my cat sits at home, plotting my demise or some approximation of the same. I love him but have learned my lesson: our surfaces have been cleared of clutter, the bedroom door will now be closed at night, and to be safe, just in case my feline friend gets any bright ideas, the phone is stored safely out of reach – at the bottom of our nightstand drawer.