She may be pretty in pink, but Windsor city officials say that an eight-pound dog named Misha is vicious. The city has named the three-year-old Chihuahua to its dangerous dog registry after she broke free and nipped a teenage girl in front of her home.

“I was in shock when the city showed up,” said Gerry Piche. Jerry’s stepdaughter, Kristin Lee, owns Misha. 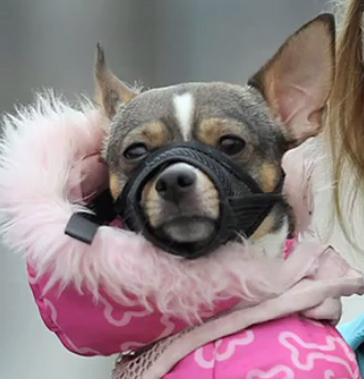 He said that on September 23rd of last year, he opened the front door of his home when Misha slipped past him. She approached three teenage girls who were walking past the house.

“I shooed the dog with my foot,” said victim Jessica Cosgrove in a written statement. “I realized it bit me.” Jessica mentioned that the dog also tried to bite her friends as well.

Piche was able to grab the dog, but not before the damage was done. Shortly thereafter, Kristin Lee was notified that Misha would be labeled dangerous by the city of Windsor.

“It think it’s hilarious,” said Lees, 22. “I don’t think it’s right. If you can’t protect yourself from this dog – it’s an eight-pound dog. It blew my mind. How are you going to claim this dog is a dangerous dog? I’m not going to walk my dog down the street with a muzzle. That’s what they’re telling me I have to do.”

The city’s dangerous dog ordinance requires that Lees must muzzle Misha in public, and post a dangerous dog warning sign in her front yard. Misha will have to be microchipped with a special chip that identifies her as dangerous, and Lees will face the expense of purchasing the required $1 million of liability insurance coverage.

Lees has appealed the dangerous dog designation. The Windsor Licensing Commission will issue a decision in the matter next month.