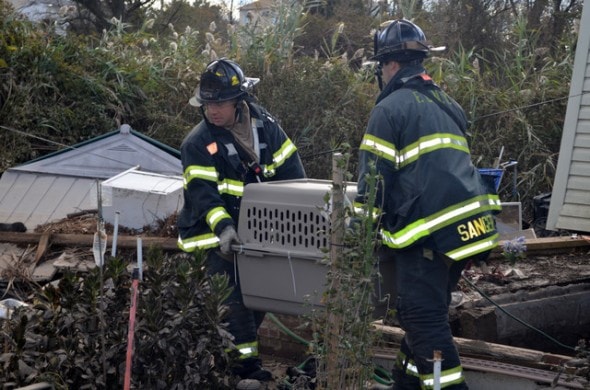 While the storm waters recede, and the power slowly comes back on, it will be a long time before some displaced home owners can go back to their houses.  For the pets they were forced to leave behind, it has been a long wait, but help is on the way.

Staten Island was one of the hardest hit communities and the Humane Society of the U.S. is doing everything possible to get to homes that are known to have stranded pets waiting for help.  At one home a fireman is trying to investigate a gas leak while a dog barks frantically form behind the door. “In a disaster area you need to prepare for the worst,” says Humane Society staff member Rowdy Shaw, putting on a thick pair of gloves. “Assume every dog is angry.”  His gear includes poles fitted with nets to catch cats, poles with slip nooses for dogs and other large animals and even long tongs for snakes.  They also come prepared with crates to contain the animals and keep them safe.

Shaw is able to get inside and connect with the dog, a shepherd-chow mix named Bear who weighs about 80 pounds.  After calming the frantic animal he loads him into a crate and 2 firemen carry him to the truck so that he can brought to his owner.  “New York has put policies in place that others should look at,” says Patrick Kwan, also with the Humane Society. “Animal-friendly policies, like allowing pets in shelters with their owners and allowing them on public transportation.” 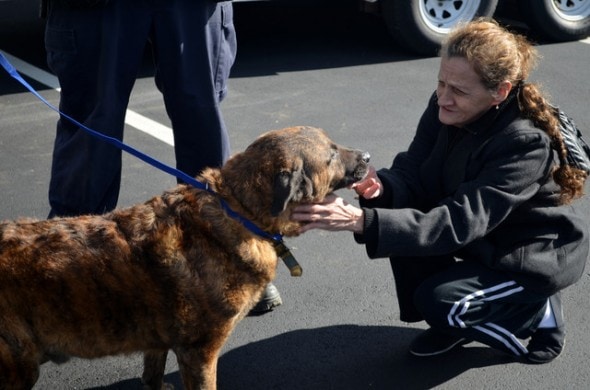 The reunion is heartwarming and emotional, as Barbara Larson gives her dog a long hug. “The animals are the only things they have left,” says Kwan. “The woman who lives there, her house is gone, and all she has are her pets.”  The calls for help are endless, and they do what they can, but the list is long and as they drive around frantic people desperately approach the trick asking for help in locating their missing pets.  The Humane Society has set up 2 centers in the area — in Monmouth County, New Jersey, and Nassau County on Long island — and plans to set up more in the coming days.

People missing pets are encouraged to call the following hotlines; New York City hotline: 347-573-1561 or New Jersey hotline: 1-855-407-HSUS.  There is also a Facebook page devoted to the cause, as well as a website. Donors also can text ANIMALS to 20222 and donate $10 to support the Humane Society’s Disaster Relief Fund.  Meanwhile, rescuers are working tirelessly and heroically bring everyone’s pets to safety.