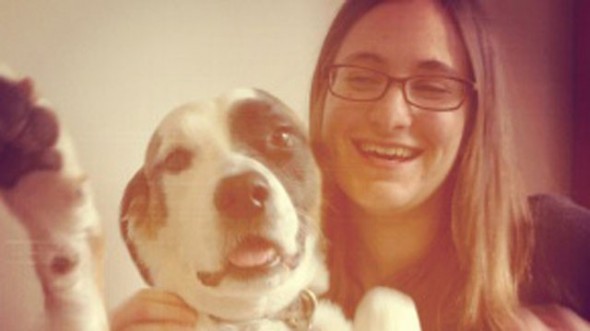 The toll of hurricane Sandy continues to mount, and for one dog survival is bittersweet.  Jessie Streich-Kest and her friend Jacob Vogelman were out walking Max when a tree fell on them, killing both Streich-Kest and Vogelman.  Max, pit-bull-pointer-shepherd mix, survived but was trapped under the tree until he was saved by a good Samaritan.

Max suffered serious injuries, including head injuries and a broken jaw, and was taken to Verg South, an emergency veterinary hospital in Brooklyn.  “He was mentally very dull because of head trauma,” said veterinarian Brett Levitzke. The dog will likely need jaw surgery after he recovers from his head injuries.  This is Max’s second rescue, the first being when he was adopted from the local ASPCA shelter by Streich-Kest 2 years ago.

Streich-Kest was a special education teacher at the Buschwick High School for Social Justice. She was an activist who championed the homeless and even the carriage horses in Central Park, and she loved Max dearly.  “Jessie was a wonderful, amazing human being and they were a perfect match, so I am happy he is surviving,” Barbara Gross, a friend of the family, said of Max. “They were inseparable.”

Jessie’s parents Jon Kest and Fran Streich, though devastated by their loss will keep Max, who is just one of many dogs that has been temporarily displaced by the storm.  NYCVert has been working with the city’s Office of Emergency Management to develop disaster planning for pets since 9/11 and estimates that about 100 animals have been rescued and taken to shelters in New York City during superstorm Sandy.  That  number does not include pets that have been taken to hospitals or are stranded in homes.

Max is now doing much better and is out of his cage and eating.  “It’s just a testament to Max’s spirit that he pulled through this tragedy,” said Levitzke.  “It’s also a testament to his owner that she went to a local shelter and saved putting him to sleep,” he said. “That’s why the whole story is really heartbreaking, but hopefully it will have a happy ending for Max.”