The Incredibly Happy Ending of a Three-Legged Dog 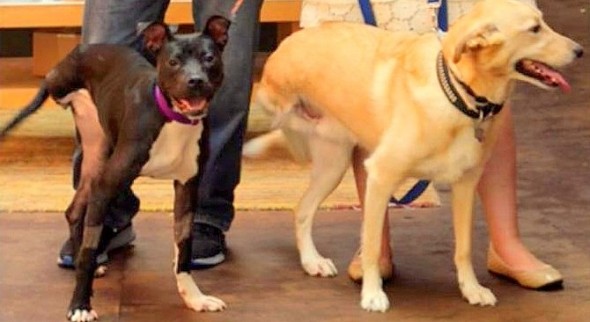 From the Chicago-based Trio Animal Foundation:

NEVER UNDERESTIMATE THE SPIRIT OF THE DISCARDED… AVIVA HAS MADE A FULL RECOVERY AND HAS FOUND HER FOREVER HOME!!!

Aviva was picked up as a stray on the southside of Chicago and was brought to an open access shelter. There was an injury to her hind leg that was bandaged and she was put on antibiotics while being held for the mandated five-day stray hold at the shelter.

When her stray hold was up, the vets at the shelter checked her leg and found that the wound had become so infected and necrotic that the only option was to amputate the leg and hopefully eliminate the source of infection.

Three days after Aviva’s leg was amputated, TAF was contacted about this poor girl and we committed to taking her into our program. 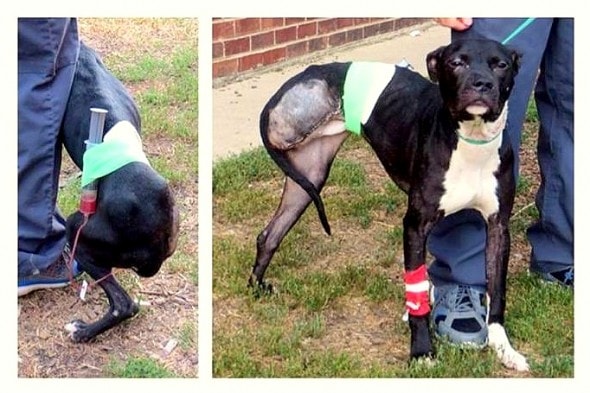 When we picked Aviva up from the pound, we noticed there was blood oozing from one end of her stapled skin. When we looked more closely, we could see that several staples had come out and muscle tissue was visible. Concerned for her well-being, we rushed Aviva over to our vet where she was examined. Aviva’s doctor discovered that she had a very high temperature so we elected to have a blood panel performed. Aviva’s white blood cell count is off the charts and our vet was very concerned that her medical condition could quickly become critical from blood poisoning. That night, Aviva was hospitalized on IV fluids/antibiotics and pain medication.

That very next morning, Aviva went back in for surgery to have the entire surgical area, where her leg was removed, re-opened and cleaned out. Sadly, the infection in her leg was even worse than originally thought. A large abscess had already formed and ran deep into the joint. Our vet was able to remove a lot of the puss and necrotic tissue, but had to create a special suction drain to help pull out more puss and fluid from the infected area. At that point, her situation was very touch and go and Aviva was given a 50/50 chance of survival… it would take over a week of hardcore IV antibiotics to finally stabilize Aviva and give her immune system a chance to catch up.

After weeks of hospitalization, Aviva was able to stand tall on her own and was ready for her new three-legged life.

As it turned out, there was a very special family out there waiting to adopt a pup just like Aviva… a family that already included a 3-legged dog and a 3-legged cat… the perfect home to teach a new tripod the tricks of the trade.

Aviva was pulled from the pound in honor of our Trio’s birthday… it seems fitting that, when all was said and done, Aviva would end up living happily ever after as part of a perfect Trio. 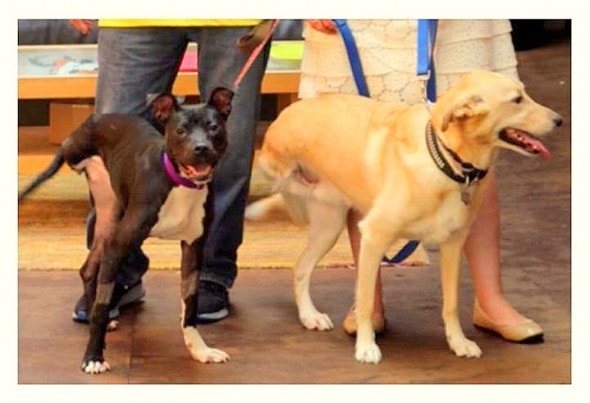