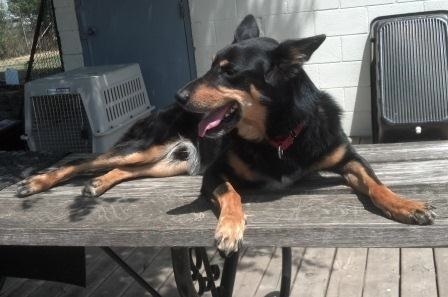 Nate’s journey to a forever home has had plenty of obstacles and if he had been in a high-kill shelter, he would probably not be with us today.

Nate was first brought to Pet Refuge, a no-kill shelter in Indiana, by a lady who had often noticed Nate tied in front of a house without food and water and looking very lonely. This had been Nate’s existance for his entire first year of life!

Each time she would stop by, she noticed that Nate would be sitting on top of his doghouse, a quirky habit that Nate still has to this day! She said that Nate would be so happy to see her and would immediately jump up to greet her. He knew no stranger and was always a total love bug. When Nate was about a year old, the owners handed him over to the concerned woman and she chose to bring him to Pet Refuge.

When he came to Pet Refuge, though, he began to stress. He would pace back and forth in front of his kennel and did not eat well, causing him to be extremely thin.

Of course, this is the opposite of what any volunteer wants to see. Instead of thriving his condition seemed to be deteriorating! No one wanted to adopt him because of this and also because no one had any idea if he was housebroken or did well with other pets.

After a few months, one of the volunteers named Tanya decided to take the chance and be his foster home. He was so funny when she brought him home! He ignored the cat and got along with the other dog but had never really been in a home. The first thing he did was walk in sniffing, got right up on the coffee table and decided to survey his new digs.

He was very insecure at the beginning and began his stay by marking their new couch and carpet. After he was caught in the act and scolded, though, he never did it again.   He also had always hated his crate, making life challenging for his foster mom. There was nothing that would encourage him to be in the crate and he would just destroy anything put in there with him. He was also extremely destructive when left alone in the house.

To help with all that energy, he and his foster mom would go on runs twice each day, running as hard as possible. What a commitment from her! He also loved to chase his foster sister, Sadie, while she played fetch, all the while trying to “herd” her. After all of that, when he was sufficiently tired, he caused no trouble.

He was an extremely smart dog and could understand a pretty extensive amount of English vocabulary. He loved to snuggle and do tricks, though he also had to have a battle of the wills at times with his foster family because sometimes snuggling would lead to him trying to take over and becoming pushy. They had to show him that they were the alpha, not him, and that they meant what they said. However, once he figured this all out, he was a dear and was always loyal and devoted. 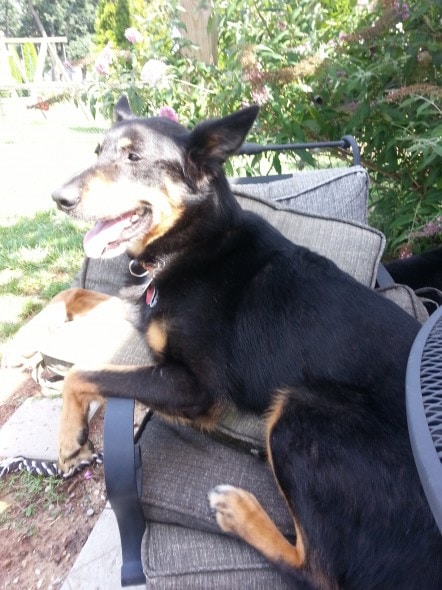 Finally, one day, another set of volunteers decided to adopt Nate. Unfortunately, though, Nate needed someone who would show him they were in charge and would be alpha all the time. They began having problems with him dragging them on walks and freaking out about unexpected things, like storms or even simply rain.  The family tried their best but, in the end, had to return him to Pet Refuge.

To make matters worse, his original foster family was unable to take him back due to changes in their circumstances. So, Nate was once again in the shelter without a home.

After several years at Pet Refuge, Nate was still a very nervous, stressed dog who was scared of rain and who was extremely stubborn. He was even put on anxiety medication to help him out. Only experienced volunteers could handle him. However, if someone showed him they were in charge, he transformed into the biggest love bug! He had his favorite volunteers and he loved sitting on the picnic table with them.

One day, one of the volunteers who had some previous experience with helping troubled fosters get adopted, Angie Edge, decided she would give Nate a try. She was nervous about it but everyone wanted the best for him!

It wasn’t all sunshine and roses, but Angie committed to working with him and she let him know that she was in charge. Just like with his first foster home, there were times that they had all out battles to determine who was alpha.

After several months with Angie, Nate was out freely with the other dogs in the home and would sleep in bed with them. Angie even developed a routine whenever weather changes were approaching. Nate was like a perfect barometer. He would know when it was going to rain at least two hours ahead of time and begin to freak out. So, Angie became very good at watching the weather and taking measures to help him relax.

Some of his favorite volunteers began to visit and they were all surprised at how well he was doing and that he seemed to be at his optimal weight after finally eating well.

Finally, the day came that he was given a permanent last name! Though Nate still occasionally chews up blankets or shoes, he is doing excellent. Age has calmed him a bit and he even goes in his kennel sometimes, on “his” terms. His favorite past time is to bring tennis balls out in the yard and leave them for someone to go searching for. He is a huge cuddle bug and loves kisses!

“It is amazing to see how far he has come and know he is truly happy.”

Though his personality may not change, Nate is at least able to, each day, grow closer to living out his full potential as the smart, precocious dog he is, thanks to the love and security of a home.