We found her sitting in a chair, alone, and when she saw Billy, she began to cry as she reached for him. 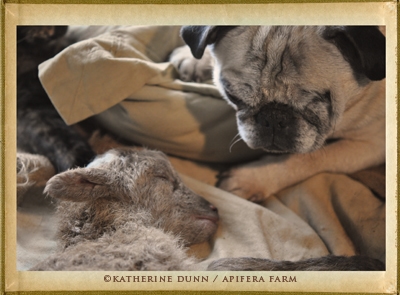 She was ninety years old and had once lived on a farm. From that day on, my pug and I only visited Rose, every Wednesday morning, and he would sit on her lap. As time wore on, she became weaker, and was bed ridden.

But the pug still lay beside her on the bed and she would pet him as she spoke to him. Towards the end, her words were few, but she could still hold his little paw. He became so calm around her too, intuitively being careful not to be rough near her. She wanted to die, and told me she was ready. I had been doing my weekly visits with her for a year, and one day I arrived, and the nurses rushed up to me and Billy. Rose had died the night before our weekly Wednesday visit. I went to see her room one last time. On the wall were many pictures of old family days, and a picture of Billy sitting with Rose.

Billy moved to the farm with me and my husband in 2004, which is where he earned the name The One Eyed Pug, after a complete misunderstanding with one of the lab pups. He is now almost fourteen, is semi blind in his one eye, has a bad heart, not many teeth, is pretty much deaf, and his hip is starting to atrophy. But he still is present, he still loves breakfast and naps with me by the fire. And like most pugs, he is still emits tons of gas and snores like a drunken cowboy.

His hospice work continues here at the farm. Early on in my shepherding, I learned a simple truth from a fellow sheep farmer, “You can’t save them all.” But you try. When Daisy had triplets one year, the weakest was a little ewe lamb with the same striking white cap on her coco colored head, just like her mother.

But there was a feeling in my bones something wasn’t right with her from the start and despite my interventions, she weakened over the morning hours. I have learned not to name lambs right away – for many reasons – but in my heart I named her “Little Daisy” and while I never announced it to the barnyard, I whispered it to mother sheep and her little prodigy. Naming an animal is a demonstration of my compassion for a fellow creature and once that name is bestowed on an animal, my relationship with them changes for it marks the beginning of a sacred journey together.

I made my best effort to save Little Daisy, but it was clear she was dying. Rescue turned to hospice and I brought her to the warmth of my studio and placed her at the hearth of the fireplace. Experience told me she had hours to live, not days. The hospice group that naturally gathered around her did so without my encouragement. The One Eyed Pug warmed her body; Itty Bitty Etta, rescued as a one-pound kitten from a rural highway observed and intuitively licked the lamb, but so gently; and the soul of the house, the chocolate lab named Huck who displays his heart in his eyes simply showed up and oozed compassion and concern not only for the lamb, but for me too.

They respectfully gave her space, but also lay near her in warmth. They were not fighting her death and they really showed no remorse or trepidation; they were simply present with the moment. It was so quiet. I stopped to get my camera, but then wondered if that was a selfish act- to photograph this private deathbed. But I felt compelled to document it, and to this day, the photographs from this day move me to my core.

I can only hope such creatures are present when I lay dying. 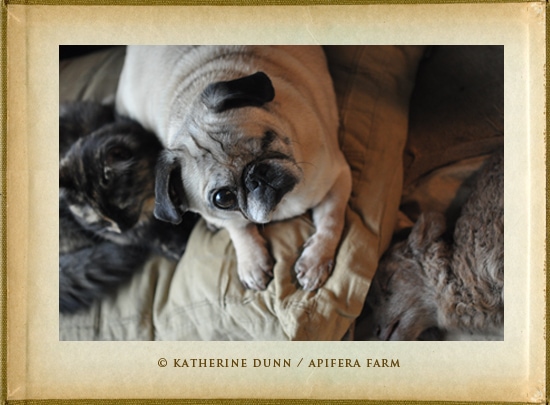