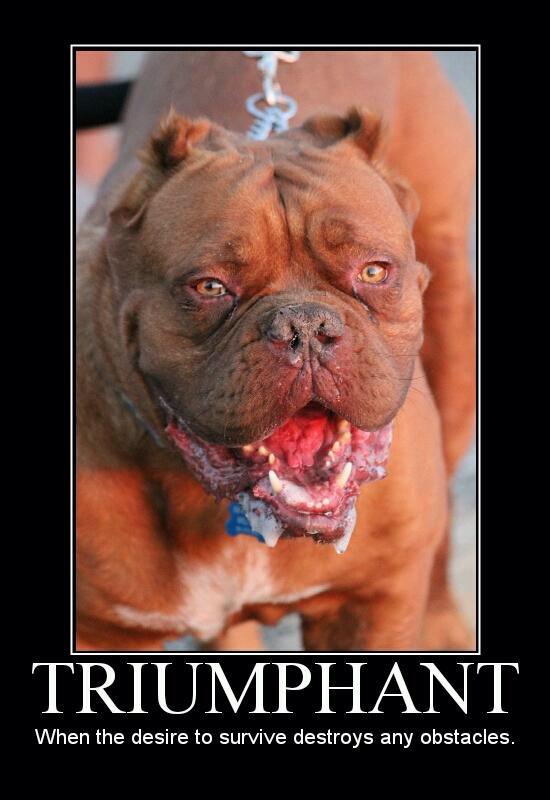 Hooch is a French Mastiff who suffered unthinkable brutality; this is the uplifting story of his recovery.

Hooch was rescued from euthanasia at the shelter by the rescue group Marley’s Mutts of Bakersfield, California.  His ears had been cut off, but that was not the extent of the cruelty shown to him. At the vet, Hooch’s rescuers discovered he had been the victim of a terrible act of cruelty, and it was determined that he must have been used as a bait dog in a dog fighting operation. He also had pneumonia, which cleared up quickly after treatment.

He needed special care to help him compensate for his lack of a tongue, and for the tongue’s importance as a dog’s cooling mechanism.

With lots of tender loving care, a year later Hooch is happy and, as his rescuers say, he is now the dog he always should have been.

Hooch’s story received widespread coverage in the news in August of 2013, and we covered it here at Life With Dogs.  You may recall seeing photos of Hooch sitting up in a high chair to eat after his rescue. Today’s post features a new video made by Marley’s Mutts that celebrates Hooch’s recovery year.

Marely’s Mutts wrote about Hooch as he was at the time of his rescue in a post at Tumblr some time ago, saying:

“Hooch came to Marley’s Mutts from Kern County’s shelter, where he miraculously survived for nearly a month with no tongue. Because this is a “trait” that would never enter into any normal human being’s consciousness (since no one is looking for such a horrific thing as part of a dog’s physical being), no one noticed this was the case with Hooch. When a bowl of food or water was set in front of him, he would thrash it all over the place, earning him the reputation of being kind of food and water “crazed”. In reality, he wasn’t ingesting much of anything, unless completely by default.

“Amazingly, even though he had dropped to a shocking 52 pounds, when a normal weight for a French Mastiff is up around twice that – he survived. And then we plucked him from the shelter, and his life dramatically improved immediately as he began life anew in the care of Marley’s Mutts and the Mutt Militia! Once at San Joaquin Veterinary Hospital in the very capable hands of our girl Andrea Bertolucci and her team of techs, the gruesome truth was discovered: Hooch had had his ears butchered and his tongue sliced completely off at the base. The dog has NO TONGUE. No way of regulating his body temperature. No normal mechanism for eating – including the various parts of that whole process: pushing the food back toward the throat, chewing, swallowing. No way to hydrate.”

Hooch’s caregivers were able to help him to overcome his physical issues and limitations, and they have successfully healed his spirit.

Not only has Hooch healed, he now helps autistic children and others.. (You can see him at work in a brief segment of the video below.)

Marley’s Mutts celebrated Hooch’s recovery year at Facebook on September 24, posting the photo at the top of this post and writing: “Hooch is the definition of TRIUMPHANT! We rescued him just over a year ago after he’d had his tongue and ear cut off. He has gained double his weight, learned how to drink on his own and how to eat from our hands . Since pulling him from the shelter, he has gone on to serve as an eloquent ambassador; but he does his communicating with actions. He is a regular at the Valley Achievement Center for autistic youth, the Bakersfield Library Barks and Books program and countless other ventures to help people learn from his grace and will to overcome. He is an adapter, a lover, a liver and an example to all of us to keep going regardless of what our past is. He is, quite simply, a TRIUMPH! ”

We covered Hooch’s story in two posts in 2013. You can see them HERE.

Watch The Story of Hooch as a recovered survivor: