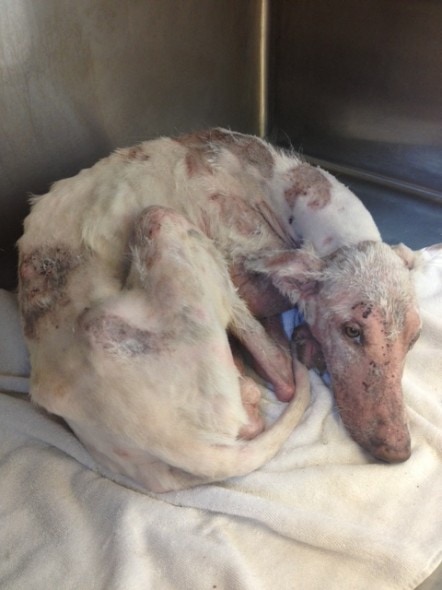 When Survivor was brought to Big Dog Ranch Rescue, in Florida, he was hairless as a result of a horrible case of mange. He was also severely underweight. No one knew what he had been through prior to his arrival but it was clear he was not being given the love and care that he deserved.

Once he arrived, staff and volunteers immediately gave him a soothing bath and a good meal. They also started him on a regimen of antibiotics so that he could begin his journey towards recovery.

After a few days under the watchful eyes of the veterinarian staff, Survivor began to perk up, standing tall with his big ears pointing straight up.

Everyone quickly fell in love with Survivor. He was so full of personality! They nicknamed him “pinky” because his skin was so pink from the infection. Luckily, this was short lived and after only two weeks, his white fur began to grow in, making the pink less visible. His ribs also began to disappear and he began to look like the lively, young dog that he should have been all along!

For the two months after his arrival, Survivor remained at Big Dog Ranch Rescue, recovering from his physical and mental neglect. He truly lived up to his name and showed an immense will to live.

Finally, one hot July day, he encountered the woman who would become his forever mom! It was a perfect match and both seemed to know it was meant to be. 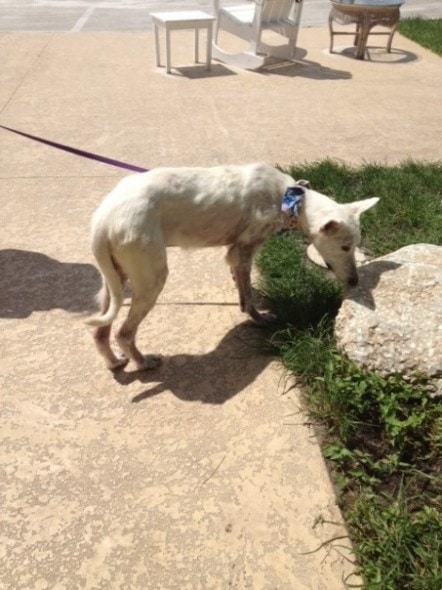 When Survivor arrived at his new home, he was renamed Kona, which means strength and courage-a very appropriate name after all that he has been through! His canine sister, Olivia-a 4 year old Great Dane-and his human mom, Tia, can’t imagine life without him.

Big Dog Ranch Rescue is a unique no-kill dog rescue situated on 28 acres in Wellington, Florida. We are the largest no-kill shelter in the state of Florida. The mission of Big Dog Ranch Rescue is to provide shelter, care and affection to homeless and unwanted dogs of all breeds and to adopt them out to loving human companions. In support of those objectives, we also promote animal welfare and celebrate the special bond between dogs and people through education, awareness and community outreach. Big Dog Ranch Rescue is associated with the Weimaraner Rescue & Adoption of Florida and is a 501(c)3 non-profit organization.

2 thoughts on “The Ultimate Survivor”