After having been surrendered for three months of medical care, Rocsi (pronounced “Roxy”) the chocolate Lab is finally going home.

A fire broke out early on the morning of May 2 at the Buffalo, New York home of Tonya Jackson, a neighbor who enjoyed caring for Rocsi when her family out. The dog was badly burned by melting Christmas decorations.

“This is a dog who wasn’t giving up,” said Gina Browning, Director of Public Relations at the SPCA Serving Erie County. “As lethargic as she was, as tired as she was, she was showing an unbelievable will to survive – unbelievable strength.”

Rocsi would require extensive medical care, but owner Afia Lott could only pay for so much. She was faced with a difficult choice – euthanize her dog or surrender her to the SPCA. She made the painful decision to give her sweet girl away, hoping the SPCA would be able to save her life. Giving her up was unbearable. Rocsi stayed by Lott’s side when she was sick, and she was devastated that she could not do the same. 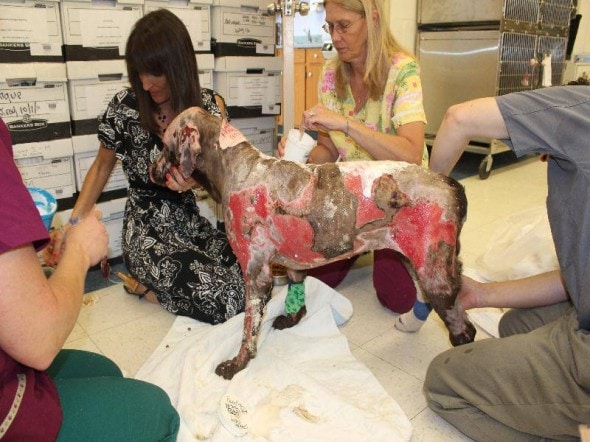 As the story broke, people were outraged that this Rocsi’s family was forced to give her up because they could not afford any more treatment. Dog lovers were empathetic, knowing how heartbroken they’d feel having to give their dog up, and soon donations were pouring in for veterinary treatment.

Buffalo may not be wealthy, but the City of Good Neighbors has a big heart, and even bigger wallets when someone is in need. Over $42,000 was sent in to cover Rocsi’s care and to bring her home, with $12,000 of the donations coming from as far away as Colorado, Washington, DC, and Canada (which is actually quite close… maybe from the west coast?).

“I feel blessed,” Lott said. “I would never have been able to afford to take care of Rocsi.”

Some debated whether Rocsi should even have been saved; perhaps it would have been better to end her suffering.

“Our response was, ‘Come on in. Take a look at this dog in the eyes, and you tell us what your choice would have been,'” Browning said. “For an animal to be in dire straights like that and not turn aggressive in any way – it’s amazing. She was suffering and was still trying to wag that tail and give us kisses.”

Lott was overjoyed to have so many kind-hearted people help during her and Rocsi’s time of need: she missed her thoughtful and intelligent family member. Rocsi knows that Lott doesn’t like being licked on the face, but that her daughter doesn’t mind.

“She’s so smart that she knows the difference,” Lott said. “I’m so glad she’s coming home.”

Friends Tonya Jackson and Kim Sieber are also looking forward to having their pal around again.

“You can’t help but love her,” Sieber said. “She’s just a gentle giant.”