This comes from our friends at the Trio Animal Foundation, a tremendously dedicated rescue group in Chicago: 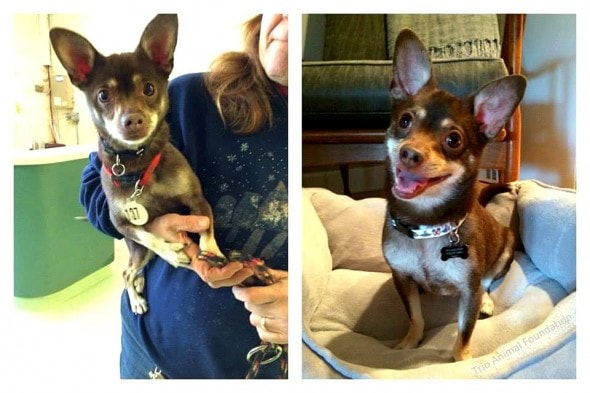 They say that fate will find a way…

Back in February while visiting an open access shelter, TAF came across a little pup that reminded us of our departed therapy dog Geiger. In honor of our Lil G, we pulled Scuttle that day and started to prepare him for adoption.

It was not too long after he was in our care that he broke with kennel cough. Coming out of a large facility, this was expected but when the outbreak of the Canine Influenza Virus hit Chicago, poor Scuttle’s weakened immune system didn’t stand a chance.

For weeks, Scuttle was hospitalized in an isolation area where he received breathing treatments, antibiotics and supportive care to help his 10-pound body survive. After over a month, Scuttle was finally breathing well enough that he was able to go into a foster home and continue his rehabilitation. 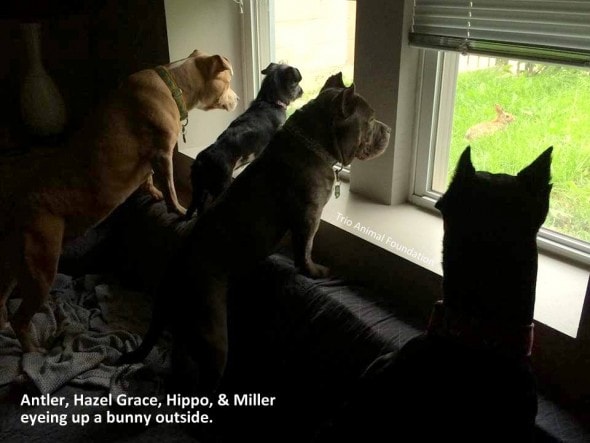 As many of you know, TAF’s youngest member of our Canine Rehabilitation Team, Hazel Grace, has been in training. Knowing that Scuttle had a good temperament right off the bat, we decided to use him to help train Hazel Grace. Scuttle went to stay in my home with Hazel Grace, Miller and Antler.

At first, Hazel Grace wasn’t too sure what this strange dog was doing in her home so CRT members Miller and Antler took Scuttle under their wing. After about a week, Hazel Grace followed the guidance of Miller and Antler and started to interact with Scuttle and show him the ropes. By the end of the second week, Scuttle was running around with Hazel Grace and he helped Hazel Grace to pass her first test.

When TAF first came to be, our beloved Trio* was still alive.  On and off for almost two years, Trio underwent physical therapy 2-3 times a week to help make her more comfortable. When the end was coming near, I counted on Trio’s therapist, Ana, to motivate Trio and to help keep her happy. Trio lived and breathed by Ana and her face would light up by the mere mention of her name. Ana was a life changer for all of us. 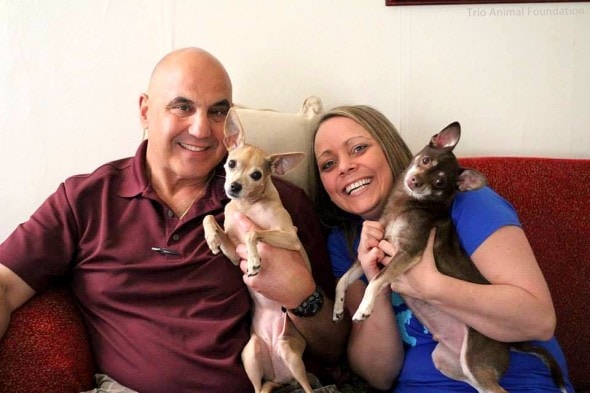 When Trio passed in November of 2011, we lost touch with Ana and thought that we would never cross paths again. Imagine our surprise when she walked out of the back room during a new vet consultation. It was sweet serendipity… the kind of chance meeting that changes one’s life… a pup’s life that is.

Well, we at TAF are happy to announce that the lil man that was pulled out of love for our departed Geiger has found his forever home. A forever home with the woman that gave our Trio some of the happiest days of her life… Ana will now pick up where she left off so many years ago. Scuttle is the luckiest boy in the world!

* Trio was founder Sue’s rescue girl.  She was a bait puppy for dogs forced to fight, and was rescued at four weeks old with her back leg bitten off.  She was only given a 10 percent chance of survival, but overcame the odds and thrived with the love given to her by her new mom.