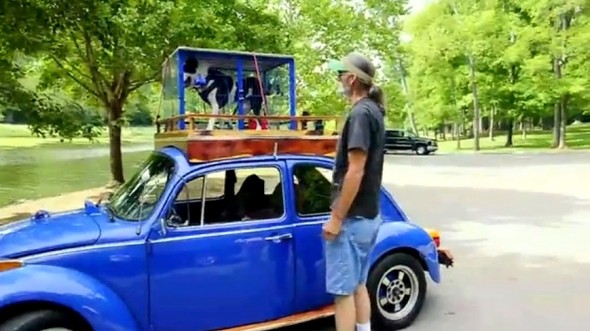 Bruce Sova drives a blue 1973 Volkswagen Beetle.  His car does not have air conditioning, but there is a nice, cool breeze out on the roof of the vehicle, and that is where Oreo gets to hang out whenever they have to travel together.

Bruce has made a special rooftop kennel for Oreo on the roof of his car.  It comes complete with a Plexiglas windshield in front, has a roof on it to keep the sun off Oreo’s back and has a soft carpet to line the floor.  The whole rig sits atop a custom-built rack made of cedar.

Bruce rescued Oreo three years ago.  Oreo was very sickly and malnourished when Bruce found him, but he took him in and has been his best bud ever since.

Bruce says he knew there was no safe way to keep Oreo inside the car.  Without air conditioning to regulate the temperature, it’s just not safe to leave him in there.  The car also has slippery seating, which makes driving with him in the tiny Beetle impractical.

With Oreo’s new traveling compartment on top of the car, they turn quite a few heads driving together around East Nashville, Tennessee. 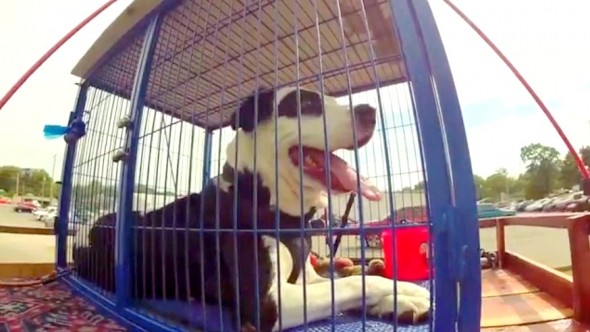 At this point, Bruce says he’s only been given one negative comment against hundreds of positive ones.

“One guy said, ‘You’re asking for it,’” Bruce said.  “Asking for what?  I’m trying to love my dog.  Every other person with a cellphone is taking pictures.”

If the people aren’t quick enough on the draw with the camera, most just stare in amazement.  It’s not every day one sees a dog riding in a specially made compartment on top of a car.  They enjoy a lot of attention on their six-mile ride from Bruce and Oreo’s home to Shelby Park and back.

Oreo really seems to enjoy his special riding compartment.  On trips, he mostly just lazes around, enjoying the breeze and the attention he is definitely getting. 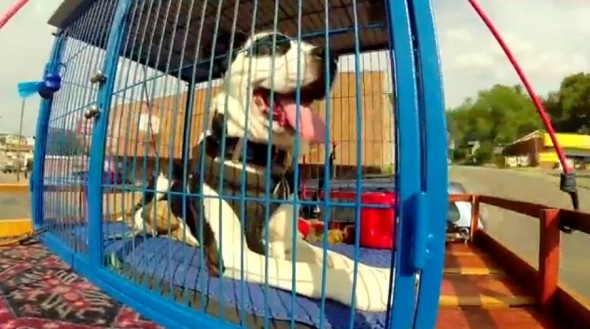