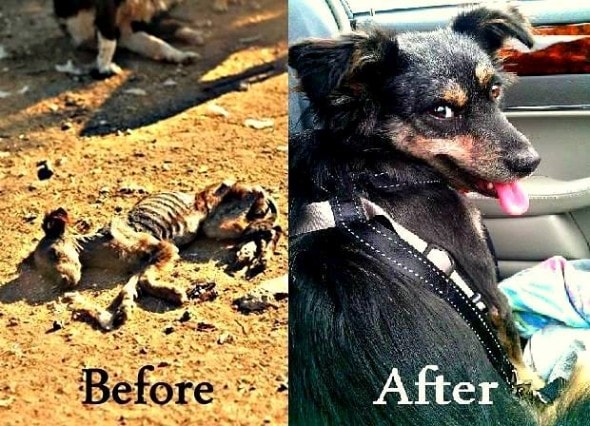 From The Animal Rescue Site:

Take a good look at this brittle body, stretched out on the dirt here in Romania. What would you say if we told you that this dog still has a heartbeat and that her story could just be the flash point that brings food to hundreds of others?

Rita was found in the street, her soul tucked inside bone and skin and organs that had gone long past thirsting for life. In the picture above, it’s difficult to believe both photos are of the same dog, but they are. The victim of near starvation here in Romania, a good Samaritan rushed Rita to the Maoland Shelter, a mother and daughter run rescue center caring for 400 dogs with the barest of resources. With tears in their eyes, the women of Maoland took in little Rita, although they had little hope of saving her. After all, they had no buildings, no running water, no electricity. Their ‘shelter’ is simply a large plot of land and some makeshift kennels and fencing for the dogs.

“Maoland is run by Marinela Pipera, a 60-year-old woman, her daughter Andrea and some volunteers,” animal advocate Linda Blaschette explains. “These people have no money, they do not even have a car to bring sick animals to the vet, the next one being one hour and a half away.”

But fate kissed Rita on the forehead that day as a member of the UK group known as K-9 Angels came across Maoland’s appeal on Facebook, begging for someone to come and save Rita. After shaking off the disbelief that the dog they were looking at was actually still alive, the angels jumped into action. In the middle of the night, volunteer Raluca Simion drove to Maoland to bring Rita to the veterinary clinic. And though few would have bet on Rita pulling through, this dog is full of surprises.

Under the care of K-9 Angels, her transformation has been remarkable as she’s grown and grown, putting on fur and fat, muscle and might. No one could have imagined she’d come out of that patch of dirt alive. And yet here she is today.

In recent weeks, the world’s ire has turned against authorities in Romania for their renewed push for mass extermination, the revival of a 20-year-old policy of brutality in the killing of stray dogs. It’s often done vigilante style, with men targeting dogs with chains and ropes, poison and even acid. Nothing good can come from sharing the photos of the dogs who have been destroyed here in recent days, but something amazing is coming from Rita’s resurrection.

“Rita’s experience is the very epitome of a rising miracle, one created by ordinary heroes determined to see her heal,” Harmony Fund Vice President Daria Justyn said. “There has never been a better moment for us to circle around the animal rescue teams here in Romania. It’s incredible to see these dogs melt into the arms of their rescuers. These moments of light, the sheer love between these dogs and the people who save them, far exceeds the darkness they seek to overcome.”

In the fifth month of our campaign for the animals of Romania, the Harmony Fund has been sending significant aid to benefit the Maoland Shelter and several others here. Efforts are also underway to expand the capacity of several rescue groups here on the front lines of resistance to the government-sponsored exterminations.

DONATE & SHARE:  Please, please help us with donations to feed & care for the animals here: http://animalrescuechase.com/donation/rescue-in-romania.html#shelter