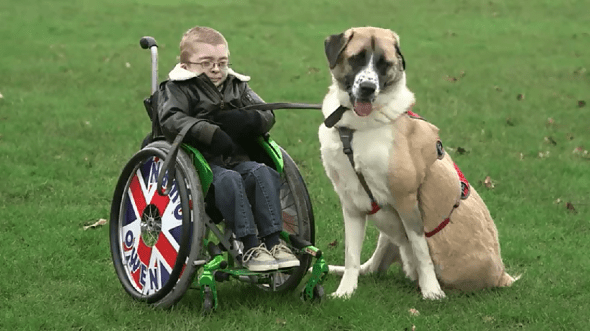 In October the story of a three-legged dog named Haatchi and his best friend, seven-year-old Owen Howkins who suffers from a rare genetic condition, warmed the hearts of many dog lovers. Not only has Haatchi become the boy’s best friend, he is helping him feel more confident and comfortable with his condition. Now Owen and Haatchi are one of five finalists in the Crufts Friends for Life competition.

Owen Howkins suffers from Schwartz-Jampel syndrome. This rare genetic condition causes his muscles to be permanently tense and he must use a wheelchair. Owen used to feel left out and scared of strangers, but when Haatchi came into his life all that changed. “When I saw Haatchi and saw how strong he was, even though he only had three legs, I became stronger myself,” said Owen. “I love him so much.” Now Owen happily interacts with strangers when he’s out on walks with Haatchi.

Haatchi is an Anatolian shepherd that hasn’t had the easiest life either. He had to have his back left leg and tail amputated after he was hit by a train when someone left him tied to a railway line. He was facing euthanasia when a charity stepped in and saved him. A year ago Haatchi came part of the Howkins family and instantly connected with Owen. “It seemed like there was a magical connection between the two of them where they knew something was different between each other,” said Owen’s father Will Howkins. “Owen didn’t know what was wrong with Haatchi and vice versa.”

Haatchi will soon be helping others in addition to Owen. A trained therapy dog, Haatchi will soon visit soldier amputees and sick and terminally ill children. Owen’s dad says that Haatchi’s story brings tears to some people’s eyes when they meet Owen and Haatchi out on dog walks. “But I think it’s a nice story, that something so horrific and terrible can actually work out good in the long run.”

Now Haatchi is being honored as one of five finalists in the Crufts Friends for Life competition. “The Kennel Club’s Friends for Life competition, which has been running since 2006, celebrates the heart-warming stories of friendship in adversity, where dogs have truly earned the title of man’s best friend, through bravery, support or companionship,” states the Crufts official website. The public will vote for the winner of this completion and the winner will be presented during the final night of Crufts on Sunday March 10th.