Justin Nalley is a WakeMed paramedic in Raleigh, North Carolina.  He was just finishing up his overnight shift Christmas morning, when he spotted a dog in the middle of the 504 expressway.  The dog was hurt, but still breathing, and he knew he had to do something.

Around this same time, Morrisville firefighters Michael Lindsey and Mike Chorney were ending their shifts and on their way home when they saw Nalley pulled over.  They also decided to pull over and help.

They gathered up the injured dog and got her to the Veterinary Specialty Hospital in Raleigh.  Emergency vet Curtis Ostrom said that their quick actions may have saved the dog’s life.

“What myself and others did wasn’t so much an act of heroism, but something we do every day of our lives and is second nature,” Nalley said.

“It’s just what we do,” Chorney said. “I mean you can’t drive by a dog laying down in the middle of the road you know, that’s just not right.”

Ostrom said that the dog had a broken leg, and may have been hit by a car judging by the internal bleeding she was suffering from.  As of the writing of this article, the four-year-old dog called Cora is well on her way to recovery.

“She’s a pretty tough dog, and so most of her injuries at this point have stabilized,” Ostrom said. “It’s mostly just her cuts and abrasions healing up.”

The Australian Cattle Dog Rescue Association has stepped in to help locate Cora’s humans.  She is not chipped and wasn’t brought in with any identification.  They hope to find her family, however if they are not located, she will be up for adoption.  For more information, click here. 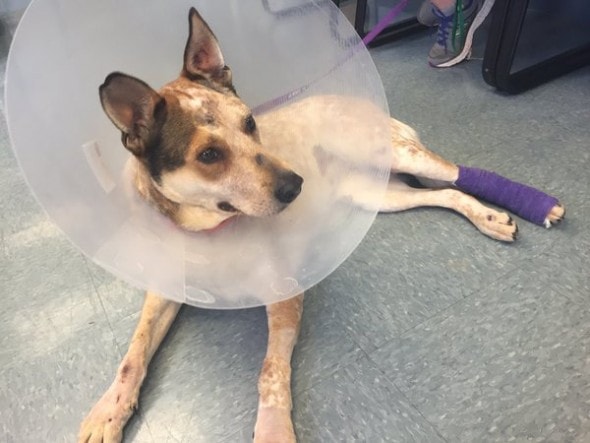