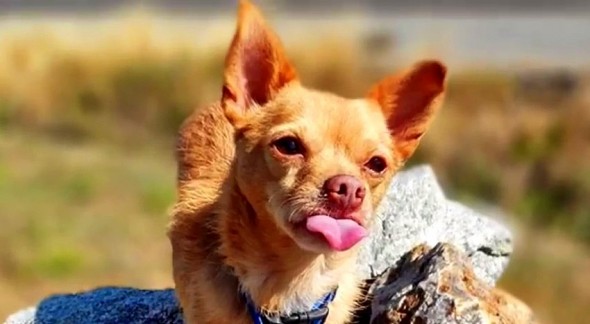 Eddie is kind of a jerk.  So the Humane Society in Silicon Valley didn’t try to sugarcoat that fact when writing up his adoption ad.  Their tactic worked – he’s been adopted!

This Chihuahua is great around people.  The staff love him, but they don’t love his behavior around other dogs.  He is a terror, making it difficult to find him a good home.

So the HSSV created an ad entitled A Full Disclosure Blog:  Three Reasons You DON’T Want to Adopt Eddie the Terrible.  They listed some of Eddie’s finer qualities, but were also sure to point out why he’s unadoptable.  Here’s the ad:

HOW DOES SO MUCH NAUGHTY EXIST IN SUCH A SMALL DOG? 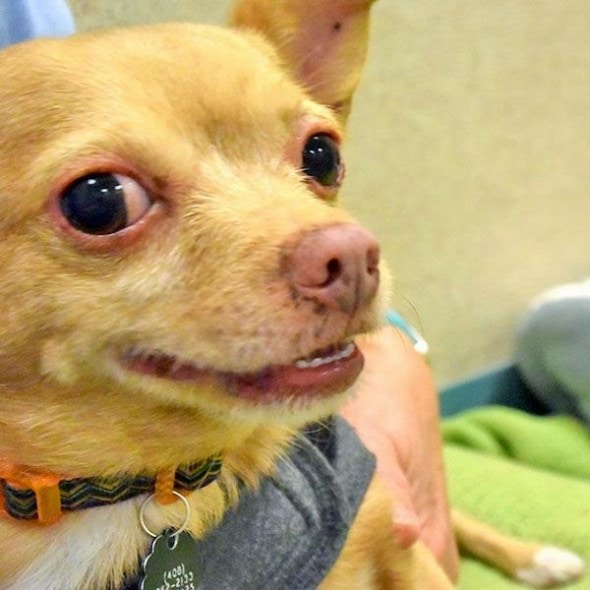 We know, we know. He is adorable. All small and yellow and fluffy. A little bit tubby, which makes him seem softer somehow, like a dog you can trust with your secrets. Don’t be fooled. Yes, he is a great listener. But inside that innocuous, adorable blonde package exists tons – indeed, whole square miles – of naughty.

It’s true: Eddie the Terrible IS terrible. And we have three great reasons you shouldn’t even think about adopting him. 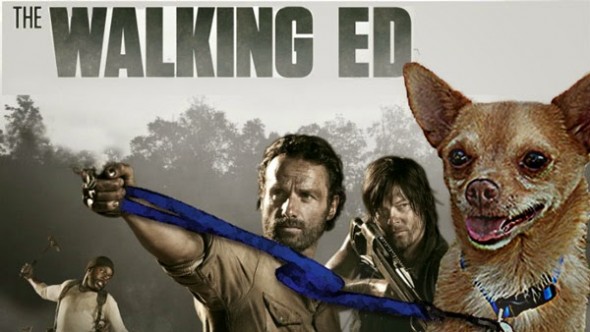 1) Like to go for walks in dog-infested areas? Enjoy the dog park? Keep walking….

While Eddie the Terrible has never actually attacked another dog, he’s made it abundantly clear that he hasn’t ruled out the possibility. He goes from zero to Cujo in .05 seconds when he sees another dog on leash. Well, sayeth you, lots of small dogs bark at other dogs on leash. True. But we know people expect a lot from dogs in this day and age and when it comes to leash theatrics, Eddie’s at the top of his game. Also true: he’s made some progress. But lest his adorable little blond-ness let you think this is going to be a plug-and-play dog, think again.

Granted, if there’re no other dogs around he’s wonderful to take for a stroll. He loves him some leash walks and yard time. But at the sight of another dog, all bets are off. It’s Cujo time.

We’re pretty sure somewhere out there exists someone patient enough to work with him on this or someone who frankly doesn’t give a bean if he likes to scream his head off for a few seconds at the neighbor’s Lab. But in the interest of full disclosure, we have to be honest. 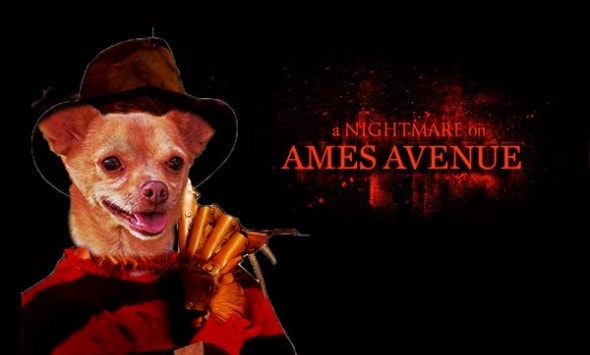 2) Want your kids to grow up with a full complement of fingers and toes? Not the dog for you.

Some dogs love kids. We have a bunch of child-lovin’ dogs. Eddie the Terrible, however, is not one of them. Honestly he’s a little whiffy with some adults, too. Not in an eat-them sort of way but in ‘this makes me very nervous’ sort of way.  Eddie’s never actually bitten anyone but we’re not saying it could never happen.

In a home environment, Eddie is lovely. He’s housebroken, loyal, fun and friendly. He lives to play fetch. But socially? He stinks. We’re in Silicon Valley – if we started throwing out the socially awkward, no one would ever have another piece of new technology again. We know somewhere out this little guy has a match. 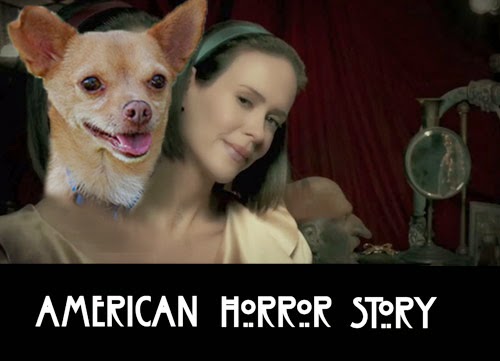 3) Looking for a simple dog that will sleep in his crate? Not your guy.

So let’s talk about the bed. Or the sofa. Or someplace that you generally like to hang out because that’s where Eddie’s going to want to bunk. Worried about dog hair on the furniture? Very valid worry if you adopt Eddie. While Eddie is crate trained, he has a weird thing about sleeping in the crate. And by weird thing we mean ‘nope, not happening’. A bed in your room? Awesome. In the bed with you? Better. In a crate? Let him sing you the song of his people…

In fact, if you’re looking for a floor-sleeping, speed bump of a dog that minds his own business, strike Eddie clean off your list. Eddie demands interaction. Not all the time and not in that follow-you-around-and-bark sort of way that makes you want to stick your head in the oven, just in a ‘whither though goest, I goest’ way. Or however that goeth. You’re in the living room? Cool, he wants to watch TV with you. Going outside? Did we mention that he loves fetch? Heck, if he didn’t want to eat other dogs he’d be a shoo-in as an agility pooch, as he’s played on the equipment and is pretty fearless. 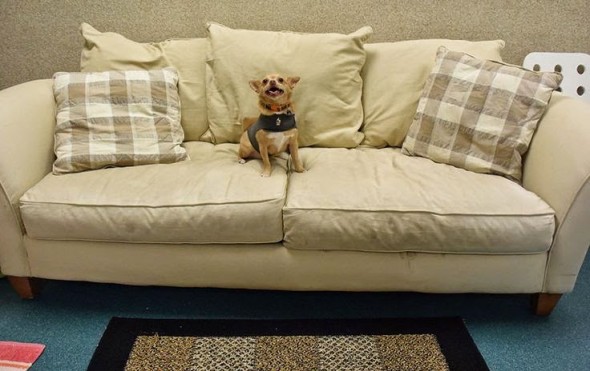 Let’s face it: unless you’re looking for a dog that’s a little bit of work, Eddie the Terrible is not the dog for you. We know, we know. He’s super loyal, easy in the house and a lot of fun, but he’s a little rough around the edges. Actually, he’s kind of a jerk. But he’s a jerk we believe in. We’re not expecting you to want to meet him, but if you must, we really can’t deter you.

If you love a challenge, are looking for the dog of a lifetime, and think you can handle the thirteen pounds of terror that is Eddie, we won’t stop you. You just go ahead and call 1.408.262.2133 ext 150. But don’t say we didn’t warn you. 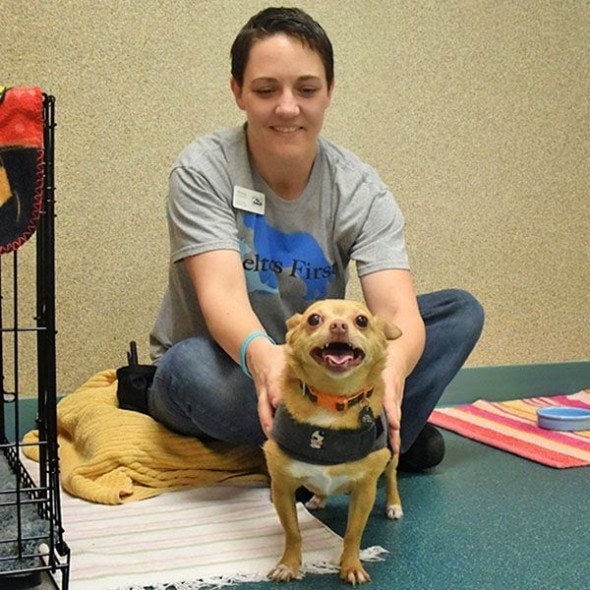 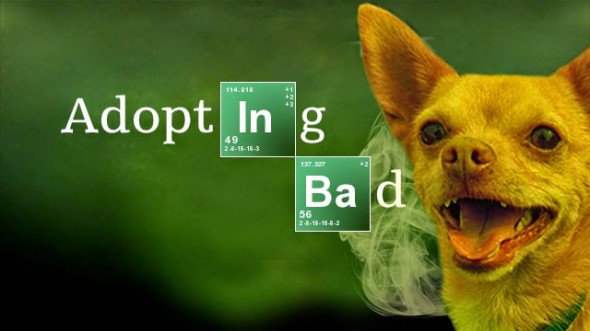 The clever marketing strategy worked:  there actually was someone out there for Eddie!  Now he’s been adopted, and is hopefully terrorizing his new family in all the best ways.  And hopefully they’re going to do some training.

Elizabeth Laverty, volunteer photographer/videographer at the Humane Society even created a horrific video for him – see it below!