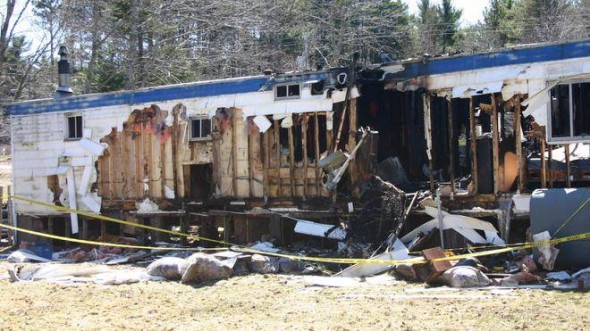 A little Shih Tzu named Kody is being hailed as a hero for saving his owners life from a devastating fire which destroyed the Nova Scotia man’s home and all of his possessions.  “It saved his life,” said his neighbour Nancy Weaver, referring to the little dog. “It very definitely did. He wouldn’t have woke up by himself.”

The mobile home and almost all of it’s contents were consumed by the fire which happened while the owner slept soundly on the couch at about 3:00 am.  Weaver was awoken by someone pounding on the siding near her window, her home being a mere 15 mere 15 metres from the blaze.  She looked out to see her neighbour amid plumes of smoke and figures he made it out just in time, thanks to Kody.  “It went into a wild frenzy, barking and screaming and jumping on him, and just in time he came out that door,” coughing from the smoke that had quickly filled his home, she said.

The man, who is on disability and cannot work due to health issues was brokenhearted about losing his home but also very grateful to his beloved dog for keeping him alive.  After the pair called 911 there was another explosion said Weaver, “There was a bang and flames shot out the roof.”  She thinks her home was spared thanks to the metal roof and the work of the 50 firefighters who battled the blaze and remained at the scene until 7:15 am.  They returned again at 10:00 am after smoke was seen coming out out of what remained of the home.

The Canadian Red Cross is helping to provide emergency clothing and other supplies while the man, who unfortunately did not have any insurance on the home or it’s contents, stays with friends.  It is believed the cause of the fire was electrical and that it started in a spare bedroom.