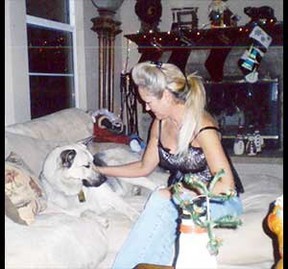 Heidi the german shepherd has a pretty great life living on a 4 acre ranch with her family and dog sibling Wolfie.  She knew how to jump over the wall surrounding the property but always came right back, after all who would want to run away from that life?  One day however, she jumped the wall and got lost on a neighbouring undeveloped property and for 34 days had not been seen.

Her owners, Charles and Diana Perez, searched, put up fliers, and ran ads in the paper for over a month but there was no sign of her.  Then one day their neighbour, a woman named Megan, was out for a hike with her 2 dogs when she heard barking.  She wisely followed the sound until she discovered a dog stuck at the bottom of a 3o foot well.

She immediately called the Carlsbad Humane Society and within 2 hours the Ramona Animal Rescue team arrived to help retrieve the trapped dog.  Megan also emailed a picture of the dog to Diana in the hopes that it was her lost pup.  In the meantime 2 men in harnesses were lowered into the well and when they got to the dog they called the number on the tag.  Diana was only 50  meters away when her phone rang and was overcome with joy, falling to her knees in tears.

A harness was put on Heidi and she was lifted out of the well and put on a leash.  She seemed physically unharmed and when she saw her owner went runnign into her open arms.  Though no one knows what she was up to for over a month it is thought that she was only in the well for a day or two.  She was in good health other than a minor infection and the well she fell into has since been covered over, though ironically falling into the well was ended up helping her find her way home.

Diana Perez said, “I will be eternally grateful to Megan for taking such swift action, and the Carlsbad Humane Society. A major debt of gratitude to the Ramona Animal Rescue Team for putting their own lives in danger to rescue my most special and dear friend. Miracles really do come in all shapes and sizes!”