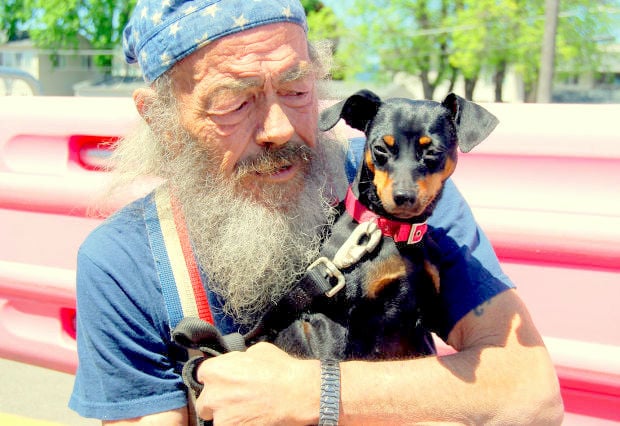 Chuck Zeiler says if you don’t believe this story, he wouldn’t blame you – he can hardly believe it himself.  His stepdaughter’s Min Pin was carried away by an owl, destined to become its dinner.  Miraculously, the little dog was found alive a few miles away.

“I wouldn’t believe it if I hadn’t seen it with my own eyes,” Zeiler said.  “It’s just crazy.”

The Mission Valley, Montana man was sitting on his front porch one evening back in April with his two Miniature Pinschers, Daisy and Buddy, and their daughter Montana, who belongs to Zeiler’s stepdaughter, Bobbie Jo Wheeler.

“I went inside to get a cup of coffee, and when I came back out the older female and male came up and sat by me,” Zeiler explained.  “I heard something that didn’t sound right, and then these two started barking at the sky.”

He ran out into the yard, searching the sky for the cause of the commotion.  He spotted a large bird, which he believes was an owl, clutching the 10-pound dog in its talons.

“I ran in the house and grabbed my shotgun, and got back out in the yard before I realized if I shot the bird, I’d kill the dog.  So I just watched the bird fly north and west, and out of sight,” Zeiler said.

He scoured the area for Montana, but had to come home empty-handed.

About 10 days later, Zeiler’s nephew saw a flier in St. Ignatius, a neighboring town.  A Min Pin had been found in someone’s field.

“They found her by a haystack, about 3 ½ miles from me,” Zeiler said.  “I guess it took them three or four days before they could get her to come to them so they could even feed her and take her picture for the flier.”

Wheeler couldn’t believe it could be her dog.

Zeiler went to retrieve their missing family member, but was unable to do so before another went missing.  He was having trouble finding the farm where Montana was being kept, and pulled into a dairy farm whose owners he knew.

“I had the little male on a leash, and he saw a cat or something and jerked the leash right out of my hand and tore off,” Zeiler said.

He and the farm owners searched everywhere, but it seemed that Buddy had disappeared.  Zeiler took a break and went to get Montana, who was a bit banged up but otherwise okay.

“She had one scab and a puncture mark right below it, but other than that she was fine.”

It is unknown what happened to cause the owl to drop Montana, but it is likely that she either struggled too much or became too heavy for the bird of prey to continue carrying her, and she was dropped right onto a haystack.

Zeiler returned to the dairy farm, calling and whistling for him until 2 am.

“I finally gave up, went home and slept for three or four hours, then went back,” he said.  “I drove in up by the barn, got out, whistled and yelled, and heard one little yip.”

Buddy was inside the barn, where his leash had become entangled on a chunk of concrete, abruptly ending his cat-chasing adventure.

“I wouldn’t believe it if somebody told me a story like that,” Zeiler said.

The dogs are all safe and sound at home now, but Wheeler says the excursion has changed Montana’s personality.

“She had a big dog personality.  Now she’s very cautious.  It made her realize she’s just a tiny thing.”