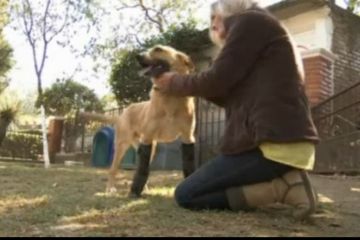 Lemon Pie is as sweet as they come.  His sweet nature is probably how drug traffickers captured him and mutilated his legs.  But now he is walking again, thanks to an animal sanctuary in Mexico.

Lemon Pie, or Pay de Limon, as he is known in Spanish, was discovered in a garbage bin in Mexico City, bleeding badly after his front paws had been sawn off.  The Belgian shepherd mix was taken in by the animal sanctuary and has recently been fitted with prosthetic legs.

“The drug traffickers used to cut each one of Pay de Limon’s paws,” said sanctuary founder Patricia Ruiz.  They would pretend they were cutting the fingers of the people they kidnapped.”

“They took X-rays and saw that the cuts went down to the joints.  That’s what they did to him,” said veterinarian Osvald Vital.

But thanks to sanctuary workers, Lemon Pie’s nightmare is over, and he is a happy-go-lucky dog again.   He is nuzzling, giving kisses, jumping and playing, as if nothing had happened.  Sadly, stories like this are not uncommon in the drug trafficking world.  But at least one dog has been spared any more misery at the hands of torturers.

“Now Pay de Limon can walk, can run, and I can tell you that he has absolutely everything,” said Ruiz.  “The only thing he doesn’t have are legs, but we gave them to him.”