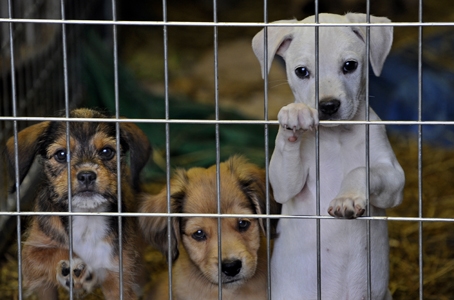 Marine Corps veteran Jim Bowman admirably served the US, and now he is performing another duty – training puppies to be service dogs for veterans with post-traumatic stress disorder.  He and two other veterans are part of the Heeling for Heroes Project at the Southern Oregon Rehabilitation Center & Clinics.  The project was started in July by Dahna Dow Osmus, a lead case manager and psychiatric nurse at SORCC.

Smokie is a 100-lb. German Shepherd-Lab mix who has just spent the past five months completing the first part of a training course with Bowman.

“He’s a natural — he makes us look good,” Bowman said.

Bowman and the others recently passed their leashes off to other veterans who have been serving as the dogs’ sitters.  When the trainers are discharged from the center, the sitters become the primary handlers in the second part of the program.

The dogs were chosen from shelters by Osmus with the goal of helping veterans with PTSD return to regular civilian life.  Along with Smokie are terrier-Chihuahua mix Zippy, and still-growing, 70-lb German Shepherd mix Sam.  Each has its own crate to sleep in right inside the veterans’ living quarters, along with lots of food, toys and supplies for grooming and cleaning up after them.

As the vets help raise and train the dogs for other vets, they are relearning patience, frustration tolerance, anger management, and teamwork, according to Osmus, who is a longtime dog owner.  Many who suffer from PTSD experience flashbacks, nightmares, detachment, avoidance, hopelessness, irritability, anxiety, hypervigilance and panic attacks.  Dogs are well-known to be soothing, and have helped many veterans.

“And easygoing,” said Bowman.  “This training has been a lot simpler than I thought it would be.  We can take him to the mess hall.  He’ll lie down by the table around all the guys.  He stays right there.  He catches on very easily.”

Marine Vincent Bocchicchio demonstrated how easily Zippy will walk into a crate when he hears the clicker.  His obedience is rewarded with a treat.

“I’ve been with him five months now — I’m going to miss him terribly,” said Bocchicchio.  “I didn’t know anything about dogs until this.  He’s a good dog.  This has been a great experience for me.”

Though the vets are sad to part with their furry friends, they know what they are doing is important and will help others.  Veteran marine Michael Smith will now take the reins with Zippy, and Army veteran Evyn Balog will step in as Zippy’s sitter.

“I love dogs,” she said.  “I’m missing two of my own dogs now who are staying with my sister.  It’s going to be nice to have a dog I can help take care of and one that will motivate me to take care of myself.”