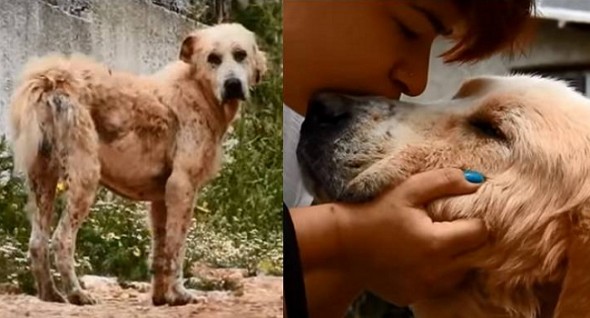 The Greek rescue organization, SPAZ, received a call about a dog in the rural area on the outskirts of Athens.  There wasn’t much information about him, but it was suspected that he had been working as a sheepdog and when he became sick or injured was simply left behind.  For all the good work he did looking after the sheep or goats he had been responsible for, no one felt they needed to be responsible for him.

The rescuers followed him, leaving food that had been infused with tranquilizers so they could get near enough to get him.  He ate some, but was also deliberate in trying to bury other portions, but demonstrated little strength for digging.  It took some time, but the tranquilizers were able to take effect and he was safely captured and transported to where he received veterinarian care for his injuries and illness.

This is a sad story about how some people seem to think animals, even those who are providing a service and making a direct contribution with their good work, are disposable.  The good news is he looks like a completely different dog now, handsome and healthy, and looking for his own forever home.  To learn more about SPAZ and the good work they are doing in Greece, and to see how you might help, please check their website, Facebook page, and Instagram, and follow them on Twitter.  To donate, please reach out to [email protected]