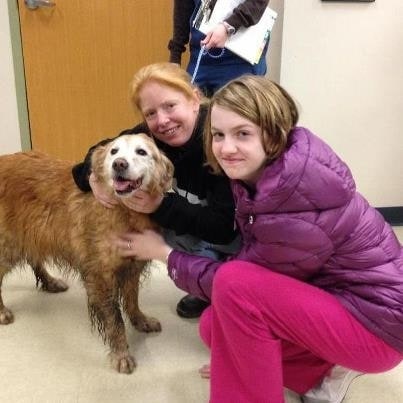 Chili is home safe and sound after spending almost a week missing from her home.  The town of Norfolk, Massachusetts came together to give Chili and the Blowers family a happy reunion.

The Blower family was devastated when their 12-year-old golden retriever went missing. Chili went missing on Tuesday December 11th and the family and town searched for days to find her. “Chili’s elderly, so she may not have the same memory that she had as a youngster and she may have just gotten lost and completely turned around,” Animal Control Officer Hilary Cohen, who lead the extensive search for Chili all week.

For days people were out searching for the elderly dog. “We had a lot of people in town looking. There was just an outpouring of people,” said Cindy Blowers.  Finally, last Sunday night Chili was found. Several members of the community stopped their cars when they spotted a golden retriever along the side of the road. “I received a call that someone had stopped on Seekonk Street by Noon Hill for a dog that was trying to walk with a limp, then lay down, was shaking, cold and wet,” said Cohen.

John Connoly pulled over first when he spotted the dog. Chili initially ran into the woods, but Connoly followed the scared dog and coaxed her out. Meanwhile, two other people had stopped to help. Together they helped put Chili in the back of one of their cars to keep her warm and dry until Officer Cohen arrived.

Cohen brought Chili to Tufts Animal Hospital and notified the Blowers that their dog had been found.Cindy Blowers and her daughter Sophie rushed to the animal hospital. “They came barreling through the door and just cried and hugged the other helper and myself for a long time until Chili was up and ready to come out and see them,” said Cohen. There were tears and hugs as Chili was finally reunited with her family.

The entire Blowers family, including their other dog Chip who was very happy to see Chili, are very grateful to Officer Cohen and the entire town of Norfolk for coming together to help bring Chili home.