LIMESTONE COUNTY, AL – A bloodhound believed to have been killed by a tornado was found alive two days after the storm blew through his kennel at the Limestone Correctional Facility.

Old Bubba had been missing since March 2nd when a twister ripped through the prison. His kennel was completely destroyed, and when he was not found in the immediate vicinity, it was assumed that he’s been carried away by the tornado. Nobody expected him to be recovered alive. 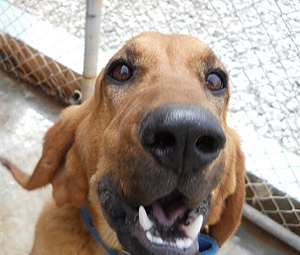 Prison officials were stunned when,  more than 48 hours later, Old Bubba was found three-quarters of a mile away, on Love Branch Road. They are convinced that the storm carried him most of the way: he was uncharacteristically skittish after the ordeal, and Captain Paul Brown said the dog would have had to cross over several cattle fences to reach the location where he was found – in a field that was in the direct path the tornado had taken. Brown says he’s convinced the twister sucked the dog up and carried him hundreds of yards.

“We couldn’t find him lying around there so I was really scared he’d got carried quite a way and we never would find him. And luck have it, we did get him back. He was spooked, but I was real glad to see him.”

He also said that Old Bubba will need some TLC before returning to work. “His jaw was broken in two places as well as a pretty good cut on one of his legs,” Brown said.

Old Bubba is expected to recover fully, and Brown said he should return to work in four or five weeks.