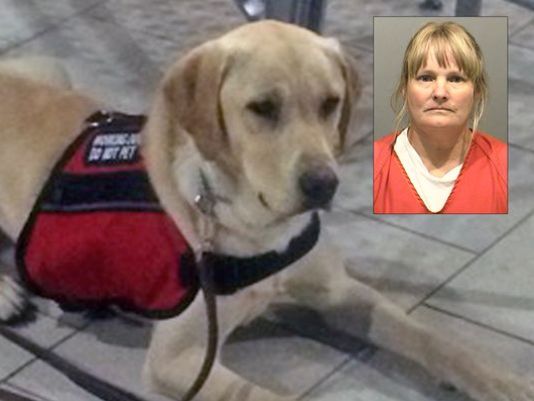 Major is the best friend, and often protector of an 11-year-old girl with diabetes from Arkansas.  Now, she is missing her best bud, and is in a potentially life threatening situation all because the trainer from Arvada, Arkansas is refusing to give the dog back to the family.

Alayna Barnes was diagnosed with type 1 juvenile diabetes when she was just 6.  She relies on an insulin pump, and it is often very difficult for her to realize a blood sugar drop, which can be fatal.  So when her parents Amanda and Edmond Barnes were deciding what to do to help keep their daughter safer, it was decided that a service dog could be just the thing.

Once the decision was made to try and get their daughter a service dog, the biggest obstacle was coming up with the $20,000 cost that comes with getting a dog capable of detecting drops and spikes in blood sugar.  However, with a little help from their home town a fundraiser was held, and the family was able to make this a real possibility for their child.

Someone had mentioned the name Julie Noyes of Alert Dogs for Life out of Colorado.  On the website for the Colorado Secretary of State, Alert Dogs for Life has been registered since April of 2013.  So they contacted Noyes and agreed to purchase a dog.  In July of 2013, a $500 deposit was made to get the ball rolling.

In December of 2013, Noyes came to the Barnes asking them to sign a contract.  There were numerous stipulations, including ones on physical and emotional abuse of the dog, and any detection of any neglect of misuse of the service dog being provided would result in the removal of the dog from the family.  No refund would be issued.  The Barnes didn’t have a choice at that point.  The dog was very much needed, and there had already been a lot of time and money invested in this by many people.

“What do you do?  Do you sign it?  Do you lose your money that you’ve already put into it?  You don’t know what to do at that point,” said Edmond Barnes.

So when the family finally got Major in March they fell in love instantly.  There was just one problem.  Major wasn’t really doing what it was the family was told he’d be completely capable of upon arrival.

“He was detecting some, but he wasn’t detecting 30 minutes ahead,” Barnes said.  “He was supposed to be a finished dog, already doing this when we got him here.  We were still having to train him basically on our own.”

When The Barnes decided to reach out to Noyes, she asked for Major to be sent back to her for some finishing work.  On the 5th of July, the family sent Major back to Colorado.  Before they did send him back to Noyes, they had him fully check out by a vet and was given a clean bill of health, and he also had a trip to a groomer to be sure Major looked his best as he traveled.

When Major arrived back in Colorado, Noyes seemingly refused to answer or return any of the family’s repeated phone calls to check on him, and see how things were coming along.  They missed their furry family member.

Eventually, Amanda Barnes felt forced to contact the local sheriff’s department to see what it was she should do.  St. Francis County Sheriff Bobby May told the news that he called Noyes personally.  She didn’t return his phone call, but her attorney did.

“They were going to keep the dog and the money too,” said May.  “I told [him] that’s not lawful.  He can’t do that.  They alleged the dog had been beaten by a belt.  That’s a lie.  The dog’s not been beaten with a belt.  He [Barnes] said they’d taken it to some vet. Their vet [Noyes’ vet] said there’s belt welts on it.  That’s just a lie.  That’s ridiculous.  The dog was not beaten,” May told the news.

So, off of an arrest affidavit a judge in Arkansas signed a warrant for the arrest of Noyes.  Jefferson County deputies arrested her Thursday, and she was taken to jail.  At this time she is out on bond, and facing theft charges in connection with the situation.

“We raised, I even donated myself, $20,000 in order to get the dog for the child,” said Sheriff May.  “We’re just not going to allow someone because they’re out of state to treat people this way.”

58 thoughts on “Trainer Arrested and Facing Charges over $20,000 Service Dog”