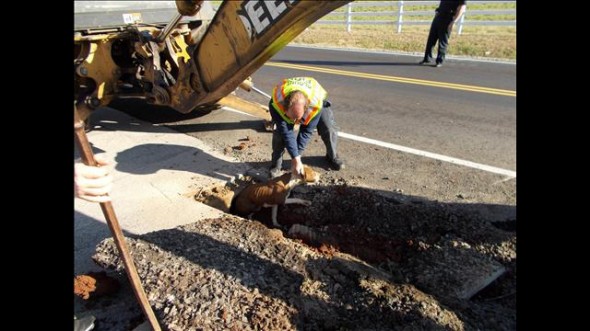 For two weeks a pit bull named Lil Mama was missing from her Tennessee home. On Thursday Lil Mama’s family finally got the call that their dog had been found. Lil Mama was still in trouble though. Her neighbors found her trapped in a drainage pipe underneath their driveway. It would take the combined efforts of the fire department and the highway department to free Lil Mama and return her safely to her family.

When Lil Mama went missing two weeks ago her family searched for her but found no sign of her. “I cried…I thought somebody had took her,” said Bridgett Spears. They spread the word to neighbors and gave out their phone number in hopes that someone might find her.

One of Spears’ neighbors had heard whining for several days but couldn’t figure out where it was coming from. On Thursday morning Dennis Cowan finally discovered that the noise was coming from underneath his driveway. So he placed food on both sides of the driveway in hopes of luring the animal out. “Finally it started howling. It smelled the food and we realized it was a dog,” said Cowan.

The Blount County Fire Department was called to help free Lil Mama. The firefighters needed help though. They called the highway department to bring in heavy machinery to dig up the driveway. It took an hour and half but Lil Mama was finally brought safely out of the drainage pipe. “[It was] a very successful operation. Good team work from everybody,” said Fire Chief Doug McClanahan.

Lil Mama was weak but alive, having spent at least several days trapped in the drainage pipe. “She’s walking around, getting her strength back; she’s becoming herself again,” said Spears. Lil Mama’s family is so relieved to have her home. They are calling her their Christmas miracle and are giving her lots of extra attention and TLC.