Dumped in a plastic bag on the side of a Seminole County highway, a young pit bull puppy has fought the odds, recovering from a major medical affliction and inspiring her rescuers in the process. Harper was saved by a woman who noticed her struggling to free herself from the bag that a roadside puppy broker had put her in. “She noticed a trash bag on the floor next to him and the bag was making noises. She asked what was in the bag and he declined to answer,” said Erica Daniel of Dolly’s Foundation, a local pit bull rescue group. 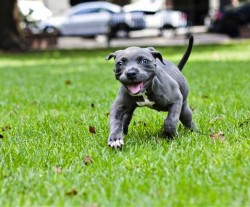 The seller had thrown away the helpless pup when he realized it could not stand. Harper has a condition called swimmer puppy syndrome, which most often proves fatal. “They stay on their chest. Their chest wall flattens out,” said hydro therapist Bev McCartt.

The seller agreed to turn the puppy over to the woman, who brought it to Seminole County Animal Services. Now Harper is spending her days receiving massages and hydro therapy. As if it weren’t enough that she nearly died of suffocation, Harper’s odds of recovery from swimmer puppy syndrome were next to none, but don’t tell her that – Harper is defying the odds, and at 11 weeks of age, she is finally able to walk.

“The swimming is to teach her a natural gait that dogs have. It’s working. It seems to have clicked something in her normal pathways and she’s like, ‘Oh, this is how I’m supposed to do it,'” McCartt said.

Growing stronger with each passing day, Harper should be available for  adoption in about a month.