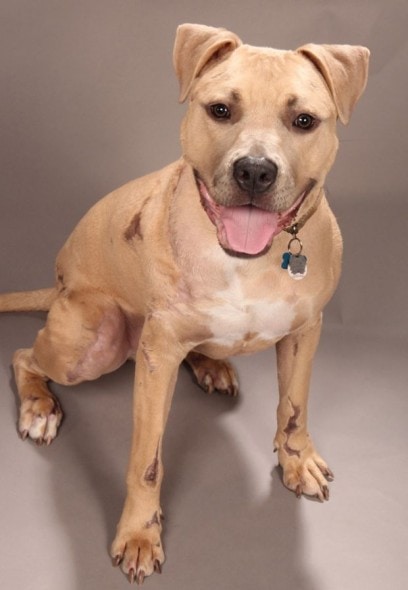 Last November, Trooper nearly lost his life when he was dragged behind a pickup truck for nearly one mile along Interstate 55 in Missouri. Now after dozens of surgeries and a year of recovering he is finally ready to find a good home.

On November 21st, 2012 Trooper was dragged down Interstate 55 while tied to the trailer hitch of a pickup. His injuries from the ordeal were serious and over the past year tens of thousands of dollars have been put towards his care.

Benetta Johnson was convicted in April of misdemeanor animal abuse for tying Trooper to the back of her ex-husband’s truck. She was sentenced to two years probation. She must also serve 150 hours of community service, attending animal care classes, and was required to donate $250 to the Humane Society of Missouri. She is also banned from owning a pet.

Now a year later Trooper is doing great. He has some scarring and will likely have some arthritis later in his life, but he is otherwise a healthy.

“He is doing great,” said Jeane Jae, spokeswoman for the Humane Society of Missouri. “He is just the coolest dog. He’s very friendly, outgoing. He loves people, loves attention. He will come up and lick you. He interested in everything.”

Trooper’s story touched thousands. He has thousands of Facebook fans on this “Team Trooper” page and a children’s book has also been written about his ordeal and recovery.

November 17th. After they have reviewed all the online applicants they will select several to be interviewed by phone. From there two to three applicants will be given face-to-face interviews.

“Trooper is a very special dog,” said Jae. “He’s been through a lot, and we want to make sure he gets the best home ever.”

To fill out the online application visit the Humane Society of Missouri’s website here.

2 thoughts on “Trooper Finally Ready for his Forever Home”