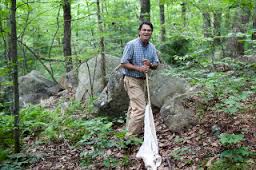 Boston, Massachusetts– Here’s another reason to keep ticks off your dogs. Scientists at Tufts University have found a new tick-borne disease.  Scientists knew that Borrelia miyamotoi has been in the American Northeast for some time but thought it was limited to deer. It was only recently that they realized that the same tick that carries Lyme disease can also transmit the B. miyamotoi to humans.

Sam Telford, an expert in tick-borne zoonotic (shared between humans and animals)  diseases and professor at the Department of Infectious Diseases and Global Health at the Tufts Cummings School of Veterinary Medicine, identified new bacteria.  The new disease was found in the spinal fluid of an 80-year-old woman who had become increasingly ill over four months with mental confusion, loss of appetite and unsteadiness on her feet. She lived in the Northeast where Lyme disease is fairly common. She also had a compromised immune system so the doctors moved quickly to draw spinal fluid for diagnosis.  When unknown spiral bacteria showed up in her spinal fluid, the testing laboratory sent it off to Telford for identification. She has since been treated with antibiotics and has recovered.