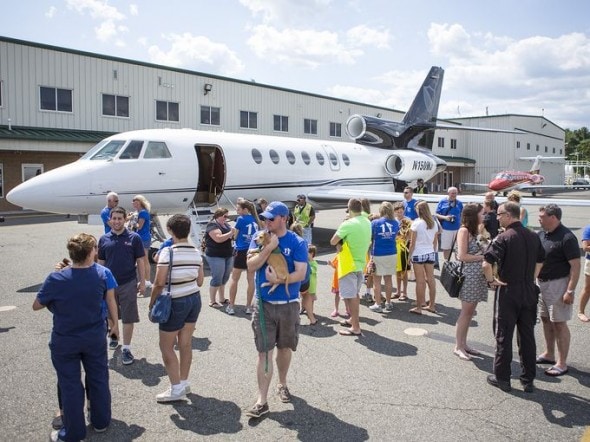 A chartered flight carrying 20 dogs rescued from high kill shelters in Georgia and South Carolina landed at Morristown Municipal Airport Sunday afternoon.  There was a mix of puppies and young dogs on board, and this effort to save these barely begun lives is all thanks to Rich Errico of Home for Good (HFG) dog rescue.

Errico is from New Providence, New Jersey.  He makes regular trips every other week in the HFG van down south, and brings back dogs to foster families, hopefully to be later placed in permanent homes.  The ride takes him over twelve and a half hours to make, and it can be stressful not just for him, but for the dogs as well.

However, thanks to a local animal lover that owns an airline service, a few times a year some of these lucky dogs only have a one and a half hour trip to make back to New Jersey.  Dirk van der Sterre is the owner/manager of FTC-FBO, and owns a private airport terminal at Morristown.  Whenever he makes flights that take him down south, he brings back as many dogs as he can carry on his way back.

Errico said, “It’s a great opportunity for us.  And so much better for the dogs.  The van ride can be stressful for them.  On the plane, they hardly know they have traveled anywhere.  It’s much less stressful.  Dirk arranges these every couple of months.  He is gracious enough to help us out.”

On his last trip, Dirk fell in love with a black Lab pup named Bree.  Apparently black Labs are a personal favorite of Dirk’s, as he already has one at home named Jasmine.  He just had to adopt Bree.

“She was sitting on my wife’s lap during the last trip,” Dirk said.  “Then I held her.  That was it.”  He just had to have more Bree in his life, so he adopted her, and she is doing well as a member of Dirk and Jill’s family.