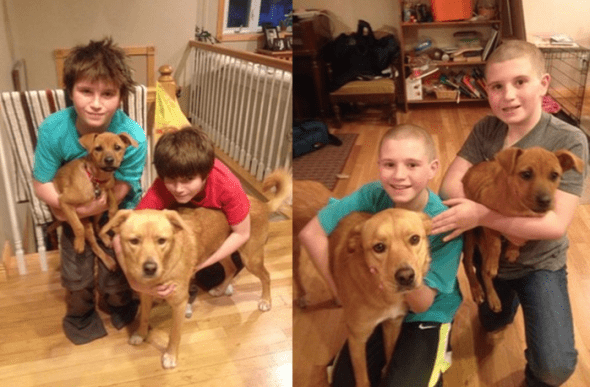 Shane and Austin Cummis are 12-year-old twin boys who wanted to raise money for a local animal rescue where they recently adopted a young puppy named Zoey. So the two boys offered to shave their heads in exchange for donations to Eleventh Hour Rescue.

Shane, Austin and their sister decided to use the money they received from this past holiday season to adopt a dog from a local shelter. That’s how Zoey came into their family. They wanted Zoey to keep their other dog Randi company. The boys wanted to do more though. Determined to raise money for Eleventh Hour Rescue they came up with the idea to shave their heads in exchange for donations. The boys managed to raise $305, more than they had anticipated.

Their parents were very supportive of the boys fundraising and their father even shaved their heads for them. When the boys presented their donation to Eleventh Hour Rescue they met Clyde, a Jack Russell mix who is in need of abdominal surgery. After meeting Clyde Shane and Austin knew they wanted their donation to go towards his surgery. All $305 will go towards offsetting Clyde’s medical expenses.

Anyone wishing to make donations to help Clyde and other animals in need at Eleventh Hour Rescue can send donations to: