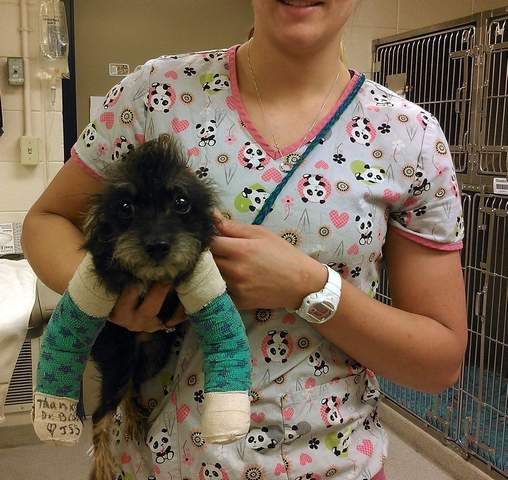 It’s the start of whole new life for Sawyer, an 18 month old terrier mix who had two broken legs which were the result of abuse.  Yesterday he went home with his  new family, a couple from Fort Wayne who were ecstatic to have the opportunity to adopt him.

Sawyer’s story became well known in January when he became the subject of an animal-cruelty case after investigators discovered that his legs had been broken as a result of being thrown.  His story became so popular that Animal Control decided to hold a lottery for the 6 most suitable and qualified adoption applicants and the couple that won were thrilled.  They wish to remain anonymous due to the ongoing cruelty investigation.

“The adopter who got picked was a previous adopter of ours, which is lovely” said Allison Miller, the agency’s adoption supervisor. “They came in with their dog and met Sawyer, and it went fantastic. It was love at first sight.”  Animal Care & Control spokeswoman Peggy Bender said of the applicants, “They were all excellent, we would have been ecstatic with any of them.”

The final step in the process was a face to face meeting and it went so well that Sawyer got to go to his new home one day early, and with a new name, Blur.  The young dog has had little training and acts like a 6 week old puppy so he will require a lot of patience and work, but everyone is confident he will get just what he needs now.  When the couple was notified by Animal Care & Control officials that they had won the husband was “ecstatic” and kept yelling to his wife, “We won the dog lottery,” Miller said. Here’s hoping Blur and his family have a long and happy life together.