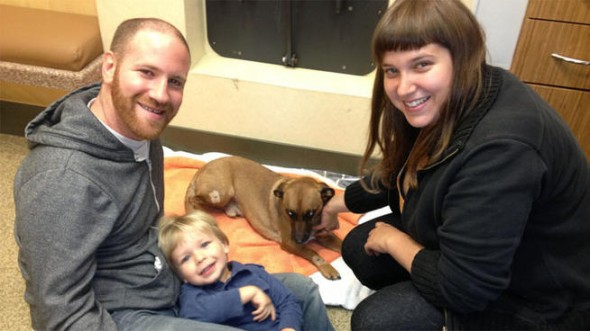 A dog that ran off in fear of being attacked is now safely back with his family.  Murray, a beagle mix, was out for a stroll with his dog walker Beth Kemler and her 2 dogs on Friday morning.   When they were passed by a jogger, Murray barked, and the jogger flew into a rage claiming that he had been bitten by the dog.  Kemler says he then picked up a metal bicycle fender as if to beat the dog, however Murray slipped out of his collar and disappeared.

The assailant then turned on Kemler, grabbing her inappropriately and attempting to drag her down the street.   “He’s yelling at me, ‘I’m gonna get that dog. What’s your phone number? Tell me your phone number,'” Kemler said.  “He started grabbing me in sexual places and dragging me in the street,” she said. “He actually bruised my arm.” When she began yelling for help he fled the scene.

Meanwhile, Murray was gone.  Kemler and his family had been searching for him since Friday, even setting up a facebook page to help locate him, but with no luck.  Then Sunday night the Washington Humane Society received a tip that he had been spotted and they picked up the limping dog on the side of the road.  He had apparently been struck by a car, but fortunately he had no broken bones and is recovering from scrapes and a dislocated elbow at Friendship Animal Hospital, which covered the first night of his care.

The man who assaulted Kemler is still at large however the crime was caught on police camera and his fingerprints are on the weapon.  As for Murray, his family is incredibly relieved and happy to know he is safe and mostly unharmed.