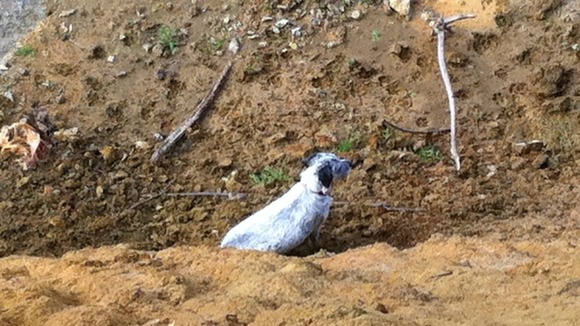 After a traumatic fall into a quarry, Dexter is once again safe in the arms of his grateful family.  Three year old Dexter was out for a walk with his owner, Jason Ensinger when he squeezed under a fence and slid down a steep slope.  He slide stopped about 30 feet down where he perched on a ledge, nervous and unable to climb back out.

Ensinger was unable to retrieve him and called for help.  The Kent fire department arrived and Station Manager Dean Firmin explained what happened next: “Wearing a harness, a firefighter was lowered down but he then had trouble trying to get the dog and it was becoming increasingly anxious and was trying to escape so we were starting to worry that it could fall off the ledge.

Since Dexter was afraid of the stranger in front of him, Ensinger suggester that he go down.  So, safely strapped into a harness and accompanied by the firefighter, he was lowered down to Dexter.  Fortunately when Dexter saw his dad, he did approach him and was taken back to safety.  Said Firmin, “The line rescue team are specially trained and equipped to deal with this sort of rescue and we’re pleased we were able to help.”

Ensinger and his family are extremely grateful to the team for saving Dexter.  “We can’t thank them enough as Dexter is more than a family pet, he’s like a child to us,” says Ensinger.  “The fire crews were fantastic and I know people would say ‘what’s the fuss, he’s just a pet?’ but he’s more than that and we’re so very thankful that they managed to help.”