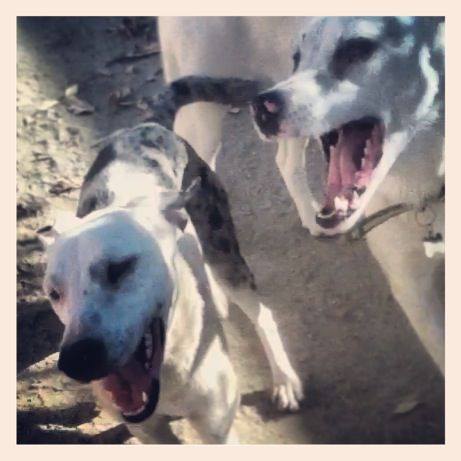 Eve and Dillon share a special bond. The two dogs were both found abandoned and disabled and were thankfully rescued by Marley’s Mutts Dog Rescue. Once they met at the rescue they quickly became inseparable. Though it would be harder to adopt the two together the rescue organization was determined to find them a home together.

It was Christmas Eve when Eve was found freezing in the snow. She is completely deaf, has a missing eye and her vision in her other eye is poor. Marley’s Mutts Dog Rescue came to her aid and it is through them she met her best friend Dillon.

Dillon was rescued after being found abandoned at a boarding facility. Dillon is also completely deaf. Once the two met it became clear that they belonged together.

“I thought they’re disabilities would separate them,” said Zach Skow with Marley’s Mutts. “But from the beginning they just clicked.”

Keeping the two dogs together would be a challenge; it would take a special family to take in two larger disabled dogs. Marley’s Mutts and their volunteers were up for the challenge though. Using social media they got the word out about just how special Eve and Dillon were.

Shelley Scudder was shown a post about Eve by a co-worker and couldn’t get her out of her mind. She knew she wanted to meet these special dogs. Scudder wasn’t sure she could take on two dogs. She already had two dogs of her own, a new home and a fiancé to consider. When she met Eve and Dillon though those doubts went away, their special relationship won her over.

Eve and Dillon have been welcomed into their new family with lots of love and are beginning their new life together.

“I think they’re going to enjoy their lives together here,” said Scudder.