Every July 28 and 29, Peruvians celebrate their independence from Spain. They throw parties, organize parades, and take to the streets to participate in the National holiday festivities. This past July 29th, while a Military Parade was taking place honoring Peru’s armed forces and police, a happy-go-lucky street dog decided to join the march.

Peru’s TV stations were broadcasting the celebration live and the stray dog’s parade participation was caught on video. 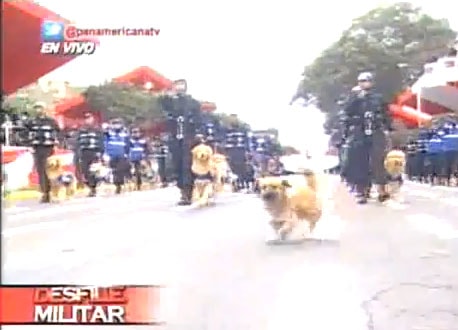 While the street canine was unaware he had made in on national television, he joined Lima’s Canine Rescue Unit on the street. On the video you can see how the dog happily hops between the officers and dogs. He then leaves the parade and joins the presidential committee.

When the street animal initially joins the parade you hear commentators say “a new little friend has infiltrated the parade,” and realizing the dog’s interruption is comical and cute, the TV program decides to follow the dog’s parade appearance.

Unaware that TV cameras were broadcasting the “parade crasher,” presidential security and personnel attempted to remove the dog from further interrupting the parade. However, they did it in the most cruel way possible.

If you watch the footage, you can see around the 45 seconds mark how presidential security pulls the dog by its tail. The defenseless animal yelps and tries to protect himself. Immediately he is grabbed by the neck by an armed force guard and is forcefully removed.

As soon as the guards abuse the animal you hear TV hosts scream and complain about the inhumane treatment the dog received. A commentator even says the canine is very loved by the community and he happens to crash the parade every year.

The televised animal cruelty has infuriated Peruvians and they have taken to social media sites to voice their dislike and criticize the treatment this poor dog received by national police members.

“That’s how a dog should be treated,” said TV host commentator.

We hope Peru’s officials are ashamed of the way they treat their animals. The Government should do something to help street animals and to educate the public – especially government employees – on how to treat pets.

Animal lovers across the world are watching!