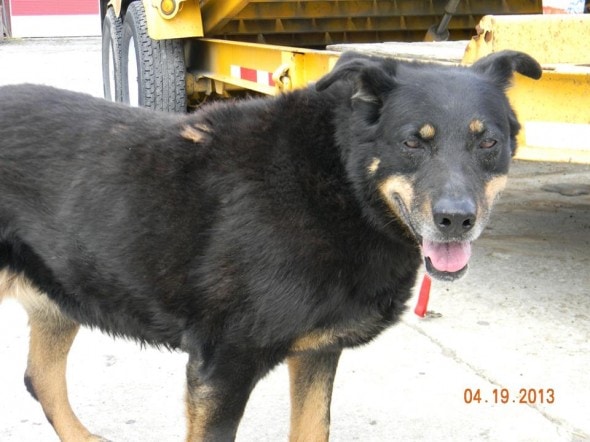 It is a story of hope and despair, and sends a clear message about the power of love.  Michel was a 10 year old Rottweiler/shepherd mix, one of 93 dogs that was rescued from a Southern Illinois puppy mill not long ago.  She was the last of the dogs waiting to find a rescue or home to go to, and sadly she passed away on Sunday after having several seizures, leaving her rescuer Elanna Bradley, heartbroken.

Elanna Bradley, a rescue volunteer and animal control officer stumbled into a puppy mill while trying to chase down a stray dog.   In conjuction with the Puppy Mill Project, Bradley was instrumental in the rescue of the dogs who were being kept at a private home.  They worked with several rescue groups to find places for the dogs to go until homes could be found and they are now spread across the country.  All except for Michel.

According to the puppy mill owner, Michel’s favourite pastime was chewing on her plastic dog house.  She shared a 4 x 6 pen with another dog and while she had food and water, with over 90 dogs on the property she received almost no love or attention.  She was 3/4 of the way through her 3rd plastic dog house when she was rescued.  “From the beginning, Michel was one of those special girls that you can’t help but love,” says Bradley. “The noise around her was deafening with the chaos and barking of 96 other dogs. I thought to myself…this is not her toy, it is her only way of releasing her stress and pent up energy from living in this cramped, loud, stress-filled environment.”

“We had to hold Michel in a kennel again while we waited for a rescue group to step up and take her in. This time she was in larger kennel and it was just hers,” says Bradley. “I put the oldest doghouse I had in her kennel – fearing she’d destroy it – and filled it with soft bedding. I took her on a walk and showed her home to her. I went into the kennel and gave her a head to tail massage and told her I loved her.”
After Michel spent some time getting to Hannah, who was in the adjacent kennel, she took the bedding out of the dog house and made herself a nest and settled in.  She never went for the dog house.  But when Hannah was temporarily moved to another kennel for vaccinations Michel immediately started pacing and then chewing on the dog house.  That was when Bradley knew for sure that it was a stress relief for her, not a toy.  Once Hannah came back, Michel was calm again, and the 2 girls lay down back to back with only the fence between them and slept.

“Michel needed what we all need, to feel loved, and to be able to show love back,” said Bradley. “The noise, the stress and chaos of her former home was bad, but the feeling of losing her friend and being alone was worse. I took that beautiful face of hers into my hands and I promised her that I would find her a home with a family and all the love she needed.”

Sadly, Bradley never got that chance to fulfill her promise.  About 2 weeks after being rescued from the mill Bradley found Michel having a massive seizure, and veterinarians were pretty sure she had been having them all night.  Bradley made the difficult decision that no one ever wants to make.  “I drove to the nearest fast food place, got her a cheeseburger and fries and asked the vet for some time with her,” said Bradley. “I held the food up to her nose, but she did not respond. Her breathing was so shallow, and I am not sure she even knew I was there. But, I held her and I told her I loved her and how sorry I was. The vet came in and put her to rest, I stayed with her and held her until she passed.”
When Bradley returned to the kennel she heard the grieving howls of Hannah mourning the loss of her new friend.  After just 2 short weeks the pair had bonded and fallen in love.  Bradley’s silver lining is knowing that Michel’s last 2 weeks were the happiest of her life, and though Hannah now has a new playmate she still sometimes cries for Michel.