CHARLESTON, S.C. – Unchain Charleston, a program of Pet Helpers that builds fences at residences where dogs have previously been tethered, will celebrate its 10th fence installation this Saturday at a home on James Island. 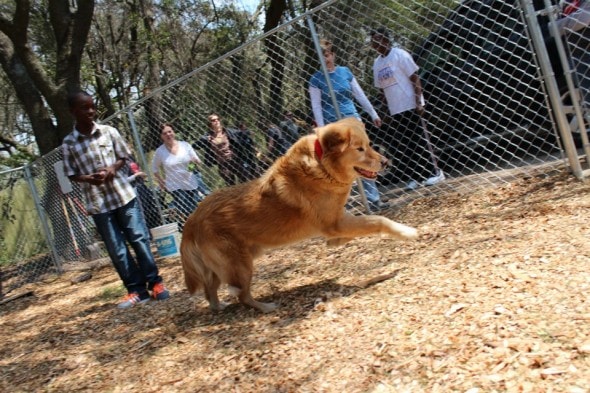 The program has grown tremendously in popularity since its inception in April 2012. Although legal in South Carolina, chaining is considered both an inhumane and unsafe practice by animal experts. The United States Humane Society reports that since dogs are naturally social animals, keeping a dog chained or tethered to one spot for hours, days or months creates immense psychological damage. Studies show that tethered dogs are more likely to become aggressive and anxious.

Unchain Charleston began after Pet Helpers staff and volunteers bonded with Brownie, an Labrador Retriever mix who was surrendered by his owner after he had become aggressive towards humans and other dogs. Brownie had spent years on the end of the chain and efforts to rehabilitate him were unsuccessful. Brownie remained aggressive.

Brownie’s plight led Pet Helpers to begin questioning what it could do to combat the practice of tethering dogs to stationary items. Unchain Charleston was born as a way for the group to create an alternative for chained dogs and to raise the level of conversation in the region about this inhumane practice.

“Unchain Charleston has been an immense success,” Pet Helpers Executive Director Kevin Ryan said. “In addition to freeing 10 dogs from chains, we have started a community-wide conversation. This program has grown and will continue to grow as our community’s understanding of the perils that befall dogs on chains grows.”

The organization has been aided by Lowe’s of James Island, who provides a discount on materials and instructed the group on how to build the 20’x30’ enclosures.

“This has been a great thing for us,” Lowe’s Store Manager Clint Wimer said. “It started out as part of our Heroes Project in 2012 and we’ve continued it because it is so popular with our employees.”

Unchain Charleston has done fence builds on James and Johns Islands but will begin to expand its reach to include West Ashley, Mt. Pleasant and other areas of Charleston County. Anyone interested in having a fence built for a tethered dog can learn more here. Those interested in volunteering can email [email protected]org.

“Unchain Charleston reminds us that the fight for animal welfare not only starts in our neighborhoods, but in our own backyards.”