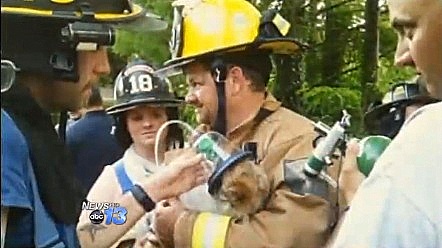 On Wednesday night, firefighters in Waynesville, North Carolina came to the rescue of the Keith family – not by saving them, but their dogs.

“They didn’t have to go in and save the dogs, but they did,” said daughter Brooklyn Keith.

The team arrived to the home to battle the blaze, and contained the fire to one room. They were notified that there were two dogs inside; one of them took off outside, but the other, named Ginger, was hiding.

“She was actually hiding under my little brother’s crib,” Brooklyn explained. “I don’t know if she thought he was in there and was trying to protect him.”

Ginger was on the brink of death, nearly suffocated from the smoke. Valiant firefighters brought her out and revived the little dog using a special pet oxygen mask.

“The dogs are human to a lot of people; they’re their young’uns, and just as important part of the family as a human being,” said firefighter Jason Griffin.

Ginger was taken to the Country Lane Animal Hospital where she is expected to make a full recovery.

When repairs are finished and the family moves back, home, Brooklyn said she will put stickers on the windows to let firefighters know dogs are inside, in case this ever happens again.