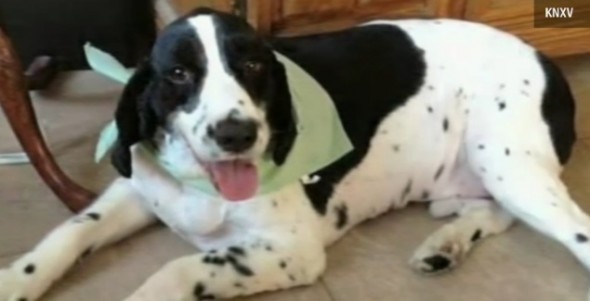 After being mistakenly sent to Ireland, a six-year-old springer spaniel named Hendrix is back home again.

The jet-setting pup was supposed to fly from Newark, New Jersey to Phoenix, Arizona, but instead traveled to Ireland.  When the airline realized their mistake, they took immediate steps to bring Hendrix home, and called owner Edith Albach about 10 minutes before his intended flight landed in Phoenix.

“I felt like somebody punched me in the stomach,” Albach said.  “I mean, that’s my dog. That’s like my child.”

“When my mom called me I was like ‘my dog got sent to frickin Ireland?  How Ireland?  Not even like he went to Florida…he’s in Ireland,” said Meredith Grant, Albach’s daughter.

Hendrix was taken good care of while he was abroad, and staff made sure he was well-fed and walked.  United offered Albach a full refund of the nearly $700 paid for his flight.  But she says she isn’t sure Hendrix will be taking to the skies again anytime soon.

“I wasn’t even looking for a refund.  I just wanted somebody to say they screwed up,” she said.  “That’s not what they said.”

Albach was able to spend time with Hendrix in New Jersey before he was finally sent home to Grant in Arizona.

Grant is happy and relieved to have her well-traveled dog back, but wishes there were repercussions for the person(s) responsible for the mixup.

However, Hendrix looks no worse for the wear, and Meredith’s father Joe was able to make light of the situation.

“What do you say, except, ‘I hope he gets some Guinness and corned beef and cabbage.”