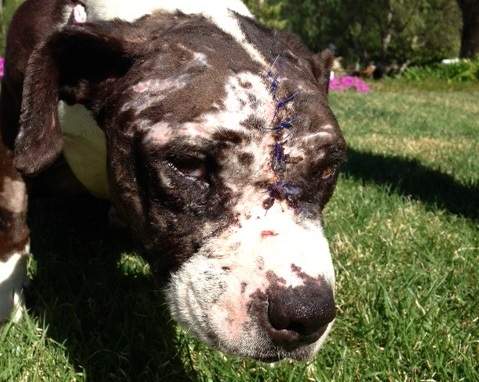 In Thousand Palms, California, a meek, two-year-old pit bull named Capone is on the road to recovery after he was found wandering near an interstate with serious wounds to his head.

It was evident that he was being used as a bait dog – he was emaciated, his muzzle was taped shut and there were festering bite wounds on his face.  When he was no longer useful, someone took an axe or machete to his skull and left him for dead.

“What I saw was probably the most horrific thing that I have seen in the time I’ve been working there,” said Animal Samaritans’ Michelle Bergeron.  “His head had been completely split open in the center.”

Despite this grim scenario, Capone has a fighting chance at survival and to find a happy home to be part of.  It was expected that he may be too badly traumatized to rehabilitate, but Bergeron was in for a surprise when she inspected him.

“The second I walked back there and I saw him, he stood up and he looked up at me, and his little tail was wagging,” Bergeron said.  “He gave me the biggest, wet, sloppy kiss.”

Needless to say, Capone passed the test.  He was sent to It’s the Pits, a San Diego-based animal rescue group, where he is receiving medical care and is doing well “on the road to recovery.”  The Animal Samaritans staff are planning to visit him once he’s cleared for adoption.

Meanwhile, the shelter asks anyone who suspects dog abuse to please call police or the Coachella Valley branch of Riverside County Animal Services at (760) 343-3644.

“Only Capone knows who did it to him.” Bergeron said.  “It’s very hard to follow the trail unless people report what they’re seeing.”