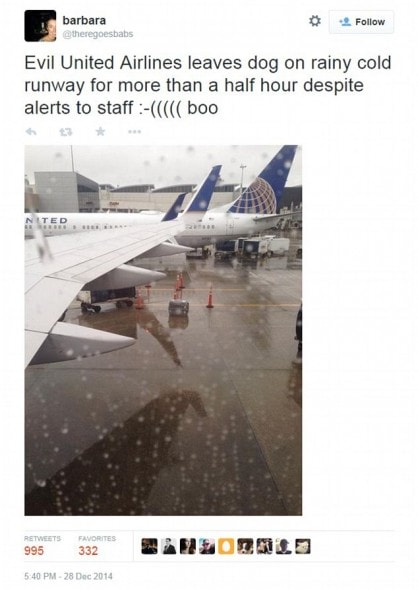 On Twitter and almost every other mainstream social media outlet on the internet today is a buzz with United Airlines and a major error they made.  Someone left a dog, waiting to be loaded onto a plane in a crate, in the rain on the tarmac for over a half an hour.  To make matters worse, when people noticed the problem and contacted the airlines, no one seemed to care all that much.

Passengers were using smartphones and cameras to take pictures of the dog stuck in the crate that rainy day in Houston, Texas.  Barbara Galletly tweeted a photo of someone’s pet just sitting and getting soaked.  Not only were people seeing this happen first hand getting upset, but with the speed of things like Twitter and the internet, it wasn’t long for people all over to start commenting on the poor treatment of the dog.

It wasn’t long before the company responded to the tweet, and perhaps it would have been better if they had made no response at all.  In what looked like a canned response of sorts, Barbara and followers were treated to:  “Thanks for telling us.  The weather can change & may have been clear when PetSafe dropped off.  They’re the ones to call too.”

So basically, ‘Thanks for the heads up, but were aren’t the department that deal with that sort of thing so, go tell them?’ is what one could pull from that.  Or at least that’s exactly what most people following things from the get go took it as.

A spokesperson from United Airlines has come forward to defend the company in its actions.  In a press statement he said, “We checked several cameras and confirmed that our ramp employees in Houston never left the pet unattended after our PetSafe employees dropped the kennel off when we were ready to begin loading the aircraft for departure.  The angle of the photo on Twitter doesn’t adequately tell what happened.  As is our standard practice, our employees placed the pet kennel completely under the wing to protect the pet from the falling rain and onto the aircraft after completing the baggage loading.”

When asked of the length of time the dog was on the tarmac, the spokesman said, “It could have been about half an hour.”

They went on to say the reason the dogs are loaded in last is so they can be unloaded first upon arrival too their destination.

Intentional or not, and even if the “rules” they say they have in place exist and are followed or not even exist, people still took issue.  Twitter was blowing up with the story, and so was Facebook, all really calling for nothing more than an apology.  You can be sure people will be thinking of a different airline company next time they need to fly somewhere.