For Americans, weddings between a woman and a dog just aren’t normal, but in India, such customs still exist and it has nothing to do with animal abuse or bestiality. Eighteen-year-old Mangli Munda from Jharkhand, India, recently married a dog after the village holy man told her and her parents that the family had been cursed. According to the spiritual man and village traditions, the curse could only be broken if the girl married a dog. 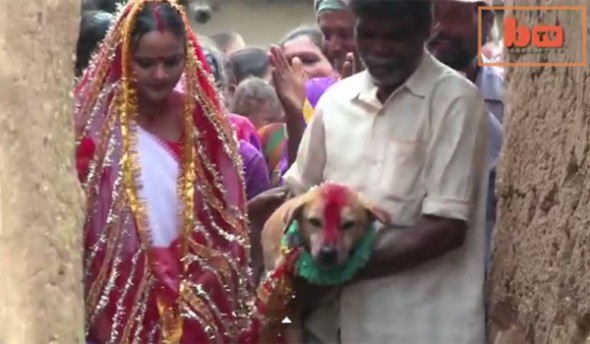 In many of India’s small villages, people believe that if a cursed woman marries a dog, the curse will be passed on to the dog and the woman will then be free of evil spells. Marrying a dog then guarantees the woman will marry a second time, but this time it will be with a man and the marriage will be a happy and prosperous one.

Munda was not too excited to be marrying a dog, but to please her parents and to not break away from tradition she accepted the ceremony. At least the dog she married will benefit from this odd tradition.

The groom was a local stray named Sheru, who from no on will no longer live on the streets or fend for himself. Munda now has to care day and night fro her four-legged husband. The wedding ceremony makes him a family pet.

Based on the wedding video (watch it below), Sheru wasn’t too excited to be getting married or becoming a house pet, but at least he got to ride on a car and will be cared for from now on.