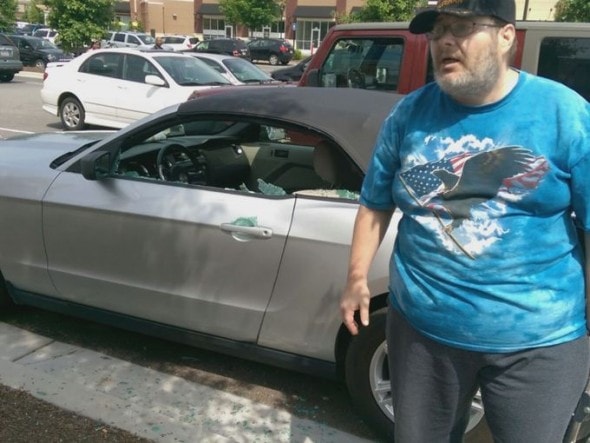 Back on May 12th, we brought you the story of Michael Hammons.  A Desert Storm Vet that took it upon himself to rescue a dog trapped in a hot car in Georgia, who was arrested and charged with crimes for his efforts.  Well, authorities in Georgia have dropped the charges against Hammons.

After hearing from someone else also in the parking lot where the incident happened that there was a dog in distress, trapped in a locked, hot car, Hammons sprang into action.  He grabbed one of the leg rests off of his wife’s wheelchair, and went over to the car.  He then broke the window, and got the dog out.

The owner of the vehicle was informed of what had happened, he was very unhappy.  She demanded that Hammons be arrested and charged with at very least breaking and entering.  The police had no choice but to arrest him.

As it stands in Georgia, you can break into a car to rescue a human, but there is nothing that protects dogs in a similar way.  Something Hammons feels is just plain wrong.

“The laws need to be changed to protect the animals, not necessarily the people,” said Mark Martin.  Martin runs a pet store, and has become a huge supporter of Hammons’ cause.  “We are the voices for the animals.  They can’t speak for themselves.”

After a local Ford dealership offered to replace the broken window free of charge, and after talking to police, the owner of the vehicle agreed to drop the charges against Hammons.  Ken Mauldin, district attorney for Athens-Clarke and Oconee counties also agreed to the decision.

Now, Hammons and many other dog and animal lovers are working on getting the laws changed in Georgia.  They are pushing for animals to be granted the same protection from the dangers of being locked in a hot car.  Something that should have been a law on the books already, as some feel.

1 thought on “UPDATE: Charges Dropped Against Vet that Rescued Dog”