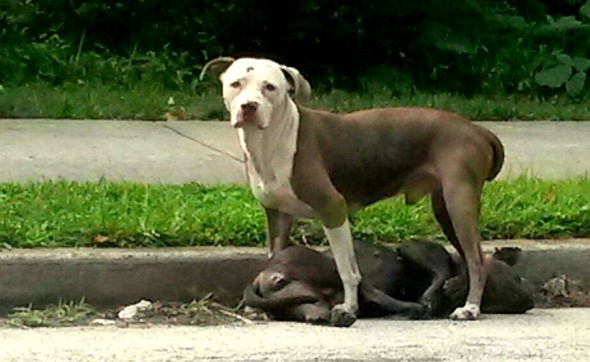 Just days ago we brought you the story of Herman, the forlorn pit bull who dutifully stood over his fatally injured friend.  Happy news – he won’t be needing a home, because he has been reunited with his family!

As Michael Mason left his Atlanta church last week, he noticed a very morose-looking dog standing in the street.  Below him, his friend, who may have been struck by a car.  The fallen dog did not make it, but her very faithful friend Herman has been rescued and is now in need of a home.

Mason snapped a photo of the lugubrious pup and his injured pal and shared it, asking for help.

“The look on his face. ‘Can someone help me?’ He was watching over him like a guard dog,” Mason said.

The photo made its way to The Walking Dead actress Kylie Szymanski, who shared it on her Facebook fan page. 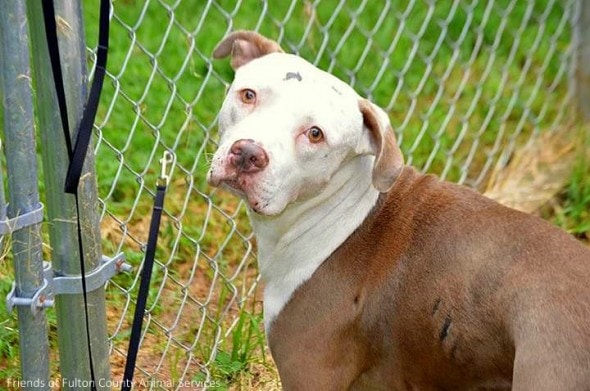 The guardian dog was taken in by Fulton County Animal Services and named Herman.  A veterinarian was unable to save his friend.  But now Herman needs a home where he can make happy new memories.

“We are grateful someone stopped and cared enough to take a picture and share it to demonstrate the power of a dog’s love. And this sweet animal didn’t leave his friend when she was injured,” said Cicley Gay with LifeLine Animal Project, who works with FCAS.

“They do feel that companionship and when somebody is gone, they miss them,” explained Kerry Moyers-Horton, a staff member with FCAS.

A handful of people volunteered to adopt him, but on July 24th, Friends of FCAS posted on their Facebook page that Herman had been reunited with his family.

“UPDATE: Herman is back with his family, and we were pleased to be able to have him neutered and microchipped before his return home. While we are not at liberty to discuss individual experiences, please know that we have evaluated the situation using our best practices and standards. Our desire is to reunite owners with their pets, and we always promote responsible pet ownership.”