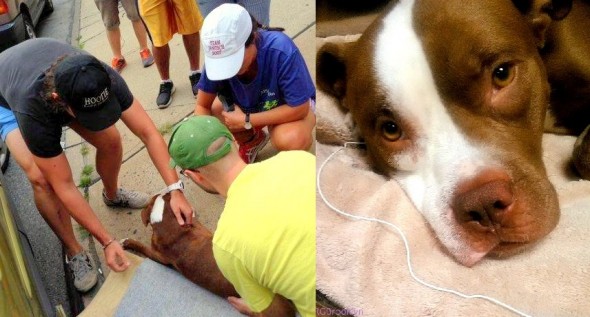 A couple days ago, we reported that a pit bull who had been thrown from the Brooklyn-Queens Expressway miraculously survived the 30-foot fall.  As it turns out, “Meeker” wasn’t thrown – he bolted from his collar and JUMPED over the side.  His owner spent the whole day looking for him, and though an investigation is pending, the runaway stunt dog should soon return home.

A number of concerned passers-by rushed to the aid of the dog who came sailing over the BQE guardrail and landed on the street below.  People made him comfortable and took him to a vet.  He had a collapsed lung, broken teeth and a banged up leg, but still, the dog, dubbed Meeker, wagged his tail at everyone he met.

It was believed that some cold-hearted person threw him to his death, but a witness from the expressway saw what happened:

“I was actually in a taxi on the BQE Tuesday evening when the taxi driver pointed out a dog running full tilt along the side of the expressway,” said Sarah Hart.  “Without warning he leaped over the concrete partition to the 30-foot drop.  We were shocked – and certain he was dead on impact.

“Of course, I don’t know if he was running from something, some other abuse, and he certainly seemed crazed, but no human actually tosses a dog off the BQE in this instance.”

The dog’s owner has come forward, and says that Meeker is actually Wookie.  Oliver Rivera explained that Wookie slipped out of his collar and darted while they were out on Tuesday.  He spent the entire day searching for him by bike, and filed a report with the Mayor’s Alliance for NYC’s Animals.  It wasn’t until the next day that he found out what happened.

Wookie is still at the Veterinary Emergency & Referral Group in Cobble Hill (VERG North) until he has recovered enough to go home.  Positive Tails had already agreed to pay for his medical expenses.

“We’re not going to go back on that now,” said Maria Moss, VERG’s director of communications.

She says an investigation is also underway, to make sure that Wookie was not indeed running from a bad situation, but as of now, there is no indication that this is anything other than a case of a mischievous dog escaping and taking a daring leap.

“We’re going to make sure we find out what’s going before he leaves,” Moss said.  “This stuff happens to lots of people.”

1 thought on “UPDATE: Dog NOT Thrown from NYC Expressway, to Be Reunited with Family”