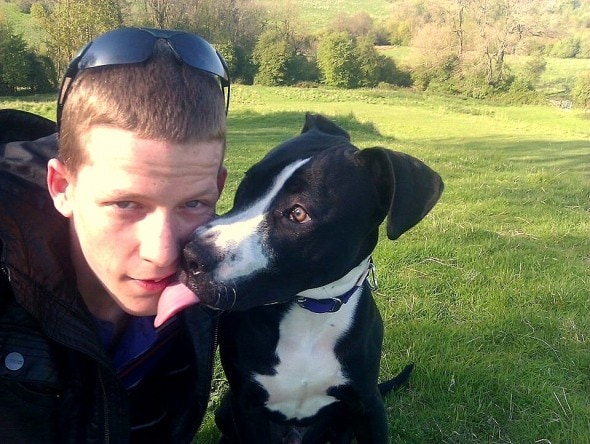 You may remember Teddy, a Staffy from the UK who was sentenced to death just because of his breed.  He was in a loving home with a little girl, and had absolutely NO history of aggression whatsoever, but because of ridiculous BSL, was seized and kenneled.  Well, after months of fighting, his dad, Tom Hook, has finally been able to bring him home for good!

Teddy has never attacked or bitten anyone, but the courts decided that he posed a threat to Tom’s four-year-old daughter.  She adores Teddy, and the feeling is mutual.  When she was ill, he spent the entire day next to her, making sure she was ok.

He even had a marvelous report from the police, but none of this made any difference, and the magistrates ordered that he be destroyed. 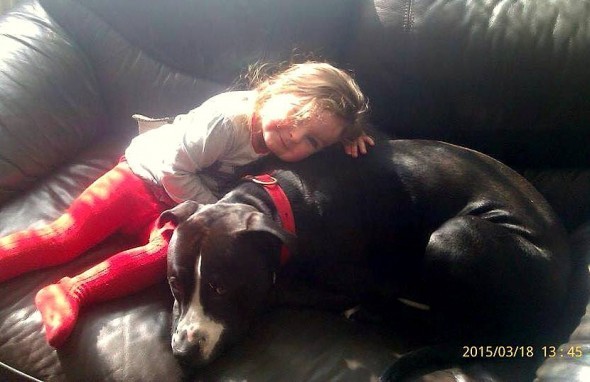 “I am distraught, devastated,” Tom told the Swindon Advertiser.  “I was 95 per cent sure that he would be allowed home. And to hear that made me so angry. He is not a danger to anyone and I will prove that.

“The most injury Teddy could inflict is from wagging his tail. It hurts that he hasn’t done anything wrong and he is being punished for it. That’s why I called him Teddy, he has the softest, sweetest nature. He has never shown any aggression to anyone.”

I recently spoke to Tom about what has happened since March, and this is what he told me: 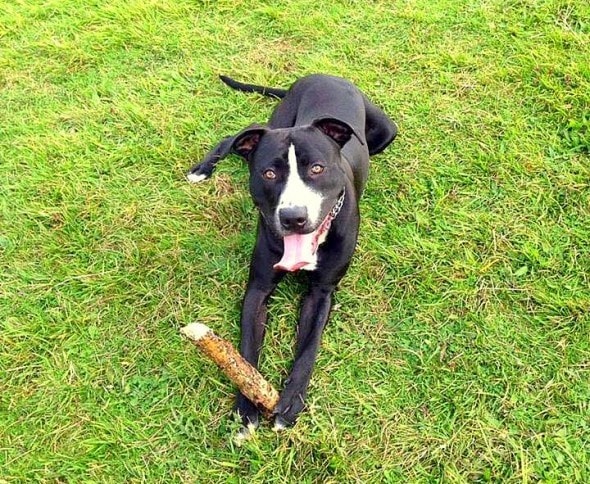 My DLO true to his word tried his best to fight my Teddy’s corner but in that room it seemed everybody’s mind was made up before we even entered, they ordered him to be destroyed due to grave risks to my 4-year-old daughter’s safety.

Immediately I went mad and filed an appeal to the crown court.  After a few months we got a date – 28th June… He was taken on the 5th of February, so he was kept in a secret kennel all that time. I wasn’t allowed to visit, although I knew the exact location he was being held (human error led me to find him), I was not meant to know of his whereabouts.

The crown court hearing was very quick.  At the hearing itself I had Pamela Rose, a legal representative from Wheldon Law firm, in my corner, along with an independent assessor (he assessed Teddy to verify his “pit bull typing” and his behaviour).  He gave Teddy a wonderful report and had a great time with my dog while doing it. (Teddy’s just lovable.)  My DLO was also present and gave Teddy a glowing report, too. 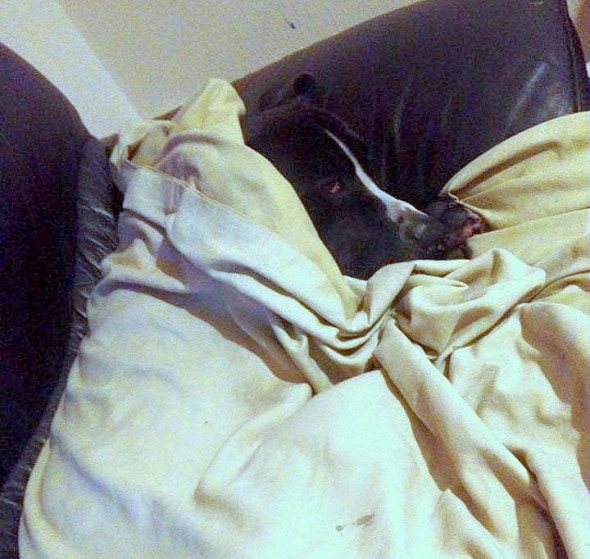 After the crown granted me my dog back they placed a contingent destruction order on him, which means he has to be neutered, microchipped, a third party liability insurance [must be] taken out on him, muzzled and leashed in public at all times, not to be in the control of a person under the age of 16, and he cannot be given away or left with anybody for longer than 30 days a year.

At the moment he is doing just great.  I wasn’t happy with the condition he was returned in, as he has lost a substantial amount of weight and is very hand shy (cowers near human movement).  He’s never been a scared dog but now he’s a bit cautious.  He will bounce back in no time at all.

Congratulations, Tom and Teddy!  Hopefully he will overcome his traumatization of being kenneled for so long.  But with all the love he is surrounded by, as Tom said, he will almost certainly bounce back in no time at all.  It will just take him a little while to adjust to his freedom. 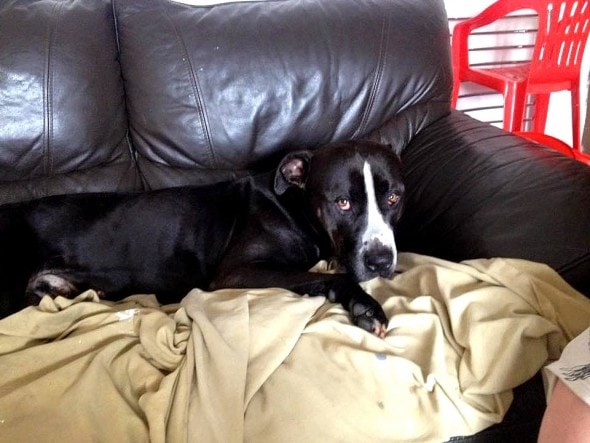 3 thoughts on “UPDATE:  Dog Sentenced to Death Just Because of His Breed Is Now HOME!”