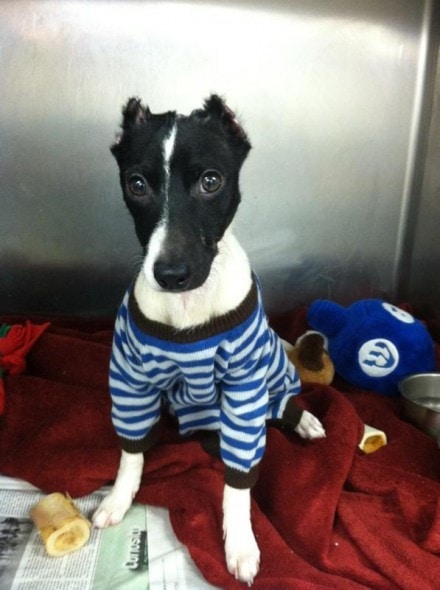 The man accused of burning Phoenix, a Jack Russell terrier puppy, by dousing him with lighter fluid and setting him on fire last October pleaded guilty to felony aggravated cruelty to animals on Monday.

Last October 19-year-old Adell Ziegler and his 17-year-old nephew Diondre Brown lit the puppy on fire in Buffalo, New York. Neighbors witnessed the crime and came to the rescue of the puppy that was given the name Phoenix.

Phoenix has made a remarkable recovery with the help of animal lovers from all over. He is almost completely recovered from his burns. He had first-, second-, and third-degree burns covering more than half of his body because of the incident.

Ziegler will face a maximum two-year prison sentence and $5,000 fine. His sentencing will occur on June 14th. He may also receive restitution for the care and treatment of Phoenix.  Ziegler’s defense lawyer told his client to expect the maximum sentence. Brown also entered a guilty plea back in December and has yet to be sentenced. He is likely to get less jail time because he has agreed to testify against Ziegler.

The horrible abuse Phoenix endured at the hands of Ziegler and Brown has led to proposed legislation known as “Phoenix’s Law.” Sponsored by Assemblyman Sean Ryan the law would toughen the penalties for those convicted of aggravated animal cruelty. “The defendant, who pleaded guilty to a horrific act of animal cruelty, will only face a maximum of two years in prison and a $5,000 fine,” said Ryan. “If enacted, Phoenix’s Law would double penalties and, in addition, those convicted of aggravated animal cruelty would have to undergo psychiatric evaluation and treatment at their own expense.”