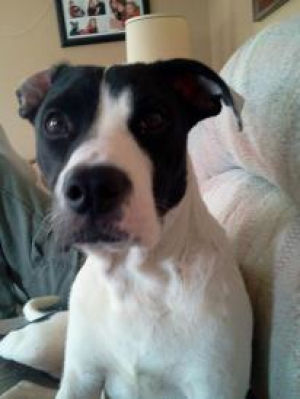 James Young was home alone and asleep earlier this month when his house caught on fire. If it wasn’t for his rescue dog Cindy Lou’s persistent barking Young wouldn’t have made it out alive.

Young was sleeping on his living room couch when Cindy Lou started barking. “I was kind of ignoring and I was like, ‘What do you want?’” said Young. “So, I kept pushing her off.” Cindy Lou refused to let up though and began barking louder and tugging on Young’s arm.

When Young finally woke up he found himself in a room filled with black smoke and he saw flames shooting out of the nearby laundry room. “I grabbed the phone and ran outside,” said Young. “I called 911, told them the house was on fire. They told me to stay outside and I said, ‘No, I have to go back to find my dog.’”

The Young family lost 90 percent of their belongings in the fire but thanks to Cindy Lou Young is alive and with his family. “That day of the fire she really proved herself,” said Young. “She knew something wasn’t right and she knew that she had to let me know.”

The Young family adopted Cindy Lou from a shelter last year. She had been neglected and abused by her previous owners. Young had been unsure of adopting a pit-bull mix but soon realized she was a sweet, loving dog and with her recent actions a lifesaver. “You hear all the horrible stories about this breed, but I’m here to tell you she is the most loving, caring dog,” said Young’s wife Kim. “Her quick reaction saved (Jim’s) life and what is left of our home.”

The Young family rescued her and in turn she helped rescue one of them. “We opened our heart to her and rescued her, and opened our home to her, and she in favor rescued us, rescued me,” said Young.