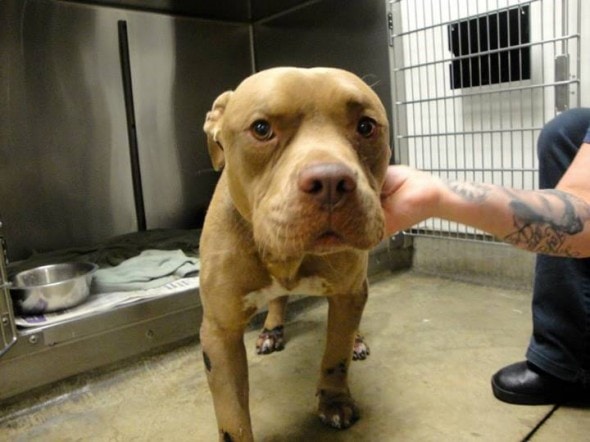 We covered Indy’s story back in June.  To read the original story, click here.

A two year prison term, along with both mental health and chemical dependency counseling are among just a few of the stipulations attached to the sentence handed down to Carlos Efrain Duarte.

Duarte is accused of strapping fireworks to Indy, an American Staffordshire, and setting them off.  He then took off in his truck and left Indy to die.  When accused of the crime he entered a plea of no contest.

According to a witness, a man was seen dumping a dog out of the back of a truck near Laurel Canyon and Victory Boulevards in Los Angeles, California.  The witness then grabbed the badly injured dog and got him to Dr. Daniel Slaton at the Westlake Village Animal Hospital for help right away.

“There were fireworks strapped to him and they lit them on fire,” said Dr. Slaton.  “That’s the burn mark patterns through the back of the legs.  As he was walking, it was burning the back of his feet.”

Using the witness description and surveillance videos, the truck was identified and belonging to Duarte.  Prosecutors say it didn’t take long for police to connect Duarte to the vehicle, and arrest him.

Duarte is ordered to serve one year in local custody, one year of supervised release, and must perform 40 hours of Caltrans work.  He also must attend 52 hours of either Alcoholics or Narcotics Anonymous and attend court-approved animal cruelty and neglect counseling.  Lastly, Duarte is banned from owning any pets for ten years and there is mandatory psychological therapy as well.

Indy was adopted earlier this year, and is doing very well with his new family.